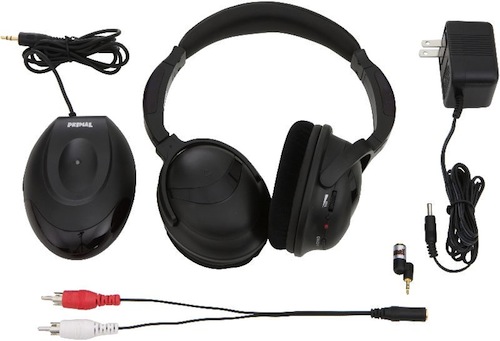 Love trash-talking on your Xbox but hate getting entangled in wires? Don’t use headphones, then. Oh, your mom threatened to kick you out of the house if you don’t cut out the noise? Give them peace and quiet while freeing yourself from cords with the Primal Wireless Xbox 360 Headset & Mic, a fully wireless solution for your console gaming audio.

Creator Rude Gameware claims it’s “the only completely cordless headset for the Xbox 360,” which probably isn’t true. In fact, I’ve seen Instructables before that detailed how to make your old wireless headphones work with Microsoft’s latest-gen console. Still, this looks like a very neat solution.

The Primal Wireless 360 Headset works via infrared, using a transmitter that plugs to your TV’s output using a 3.5mm jack, then sends game audio up to 25 feet away. Details of the headset include 40 mm Cobalt Magnet drivers, 32 ohm impedance and cushioned ear cups, powered by two AA batteries. Unlike most setups, the mic isn’t connected to the earpiece. Instead it’s a separate nub, designed to plug on the audio slot of your Xbox 360 controller.

Since the headset plugs into your TV’s output, it should be usable even for non-Xbox 360 purposes, making it perfect for watching dirty movies and death metal concerts with the volume cranked up. Of course, it can help keep your guilty TV pleasures secret too, such as the fact that you can’t stop watching Tyra like a bad habit.

Cuss people at Modern Warfare to your heart’s content without the burden of wires with the Primal Wireless 360 Headset. It’s available now for $99.95.