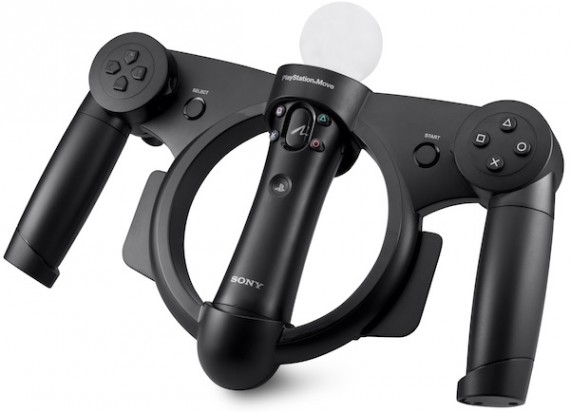 I have to say it: the Playstation Move Racing Wheel is rather an odd looking peripheral.  For one, you probably won’t even suspect it’s a racing wheel controller — I actually thought it was some kind of video game exercise accessory.  But it is a full-featured peripheral that adds an extra bit of realism when racing both cars and motorcycles on the PS3.

Looking past the appearance (and, yes, the similarly odd-looking Move deserves some of the blame), it actually sounds very functional.  I can actually imagine having fun playing with this thing, whether I’m wasting the afternoon playing Gran Turismo 5 or MotorStorm Apocalypse. But as a wise man once said, time you enjoy wasting is not time wasted. 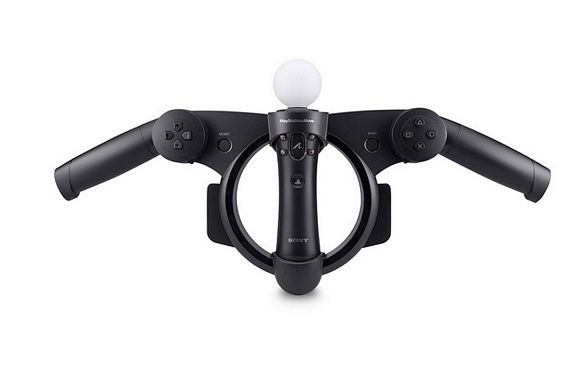 The Playstation Move Racing Wheel has a round frame at the center with a cradle for Sony’s motion controller right in the middle of it. The biggest innovation here, of course, are the adjustable grips, which fold in for regular car driving duties and fold out for motorcycle-style driving, complete with paddle shift and twist-throttle controls, respectively, for even more realistic motorsport action.

Since it’s a far cry from the realistic styling serious gamers want from their racing peripherals, we’re guessing this is going to be marketed towards younger gamers.  You know, the kind who will be interested in children-aimed titles like LittleBigPlanet Karting.

Announced at E3, the Playstation Move Racing Wheel will debut in the fall.  Price is $39.99.