What could be better than dressing in full solider regalia while playing Modern Warfare 2?  Donning the same threads while shooting online enemies with a weapon that looks like it came right off the pages of Guns & Ammo, of course.  That’s exactly what you’ll get with the PS3 Assault Rifle Controller, a realistic-looking killing peripheral for Sony’s current-gen console.

Released by CTA Digital, the gun brings more than just life-like styling.  Armed with an internal speaker, it delivers real gun-like shooting sounds all on its own, making headshots feel more impactful and mindless unloading of ammo even more exciting. 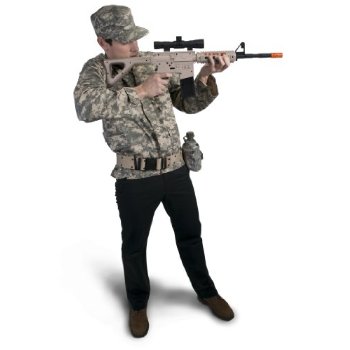 The PS3 Assault Rifle offers different modes for the trigger – single shot, three shot burst and fully automatic, each of them coming with their corresponding audio effects.  Every button on a standard  DualShock wireless controller is recreated, complete with clickable analog sticks for in-game movement, strafing and steadying your weapon.  It comes with removable stock and scope, connects wirelessly to the console via a USB dongle and is powered by two AA batteries.

While designed specifically with Modern Warfare 2 in mind, the controller should play nice with the rest of your favorite FPS titles, such as Fallout, Bad Company and Duck Hunt.   We doubt shooting virtual, quacking ducks has ever been more fun.