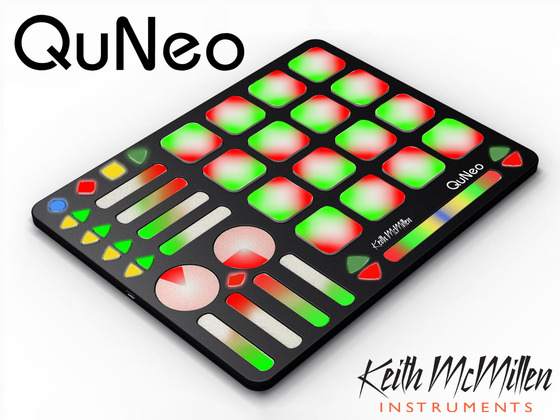 Electronic musicians love their controller pads and tablet apps.  But no matter how much they’re into their current gear, we doubt they’ll want to ignore the QuNeo, a USB music control pad that brings features unlike anything in the market today.

Aimed at VJs, DJs and other electronic musicians, the device covers all the functionality available in conventional controllers, all while adding an entirely new dimension into the equation.  There are no knobs, buttons or physical sliders on the rig — instead, the slab is fitted with touch controls that are sensitive to pressure, velocity and location.  That means more input possibilities than any music controller of its size can offer.

Spread around the QuNeo are 16 square pads, 2 rotary sensors, 9 sliders,  6 sets of switches and a set of buttons that you can use to control music on both computers and iPads.  Multi-color LEDs sit under each control, providing visual feedback to your presses.  USB, MIDI and OSC are all supported, allowing it to interface with your favorite music software out of the box.

Intentionally designed to sport the same dimensions as an iPad, the controller is compatible with regular iPad cases and stands, so you’ll never run short of accessories to use it with.  It also comes with an API and development kit that you can use to write code for taking full advantage of the device’s sensor data.

The QuNeo has currently surpassed its funding goal on Kickstarter and looks to be a much-anticipated hit among the early-adopter crowd.  A pledge of $200 will reserve you one unit.