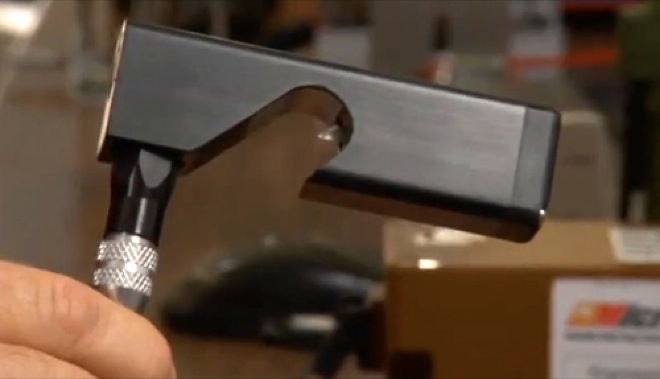 There are a growing number of options for portable charging, from wearable batteries to mini-fuel cells.  All of them are marked by the same characteristic: they’ll eventually run out.  You know what never runs out in most places you’re likely to go to?  Power lines.  And with the Remote Auxiliary Power System (RAPS), a hook-like device that can attach to power lines, you can now steal from it.

Why pay for portable electricity when you can pilfer it?   Simply hurl this thing at the cables like Batman throwing a grappling hook, adjust it till it grips and “download” enough electricity to charge more than your gadgets – you can probably set up camp with lights, a radio, a TV and an Xbox 360, all at the same time.

RAPS consists of a weighted hook with a small blade, attached to a conducting cable.  The blade pierces the livewire as the rest of the implement slides into place, sipping electric current down to a transformer that converts the AC supply to DC, where you can plug in all the power-hungry equipment you can ask for.

Developed by an engineer at the Air Force research lab in Dayton, Ohio,  it’s intended for use by Special Operations soldiers carrying electricity-powered gear in the field.   That means you’ll still be stuck with your rather pedestrian options for on-the-go charging, because there’s probably no way this will get approved for stocking in store shelves.

Check out the Department of Defense explanatory video below, which says the device is designed for use in “deserts and jungles.”  We’re not kidding.  Apparently, there’s serviced electricity in the deserts and jungles the American military conducts special missions in.  Who’d have thought?