Razer Edge Is A Handheld Gaming Tablet With A Unique Controller 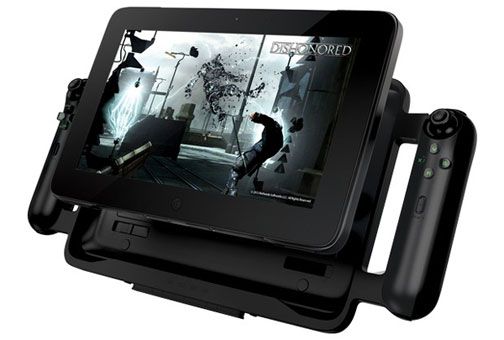 For the last couple of years, Razer has kept busy prototyping a variety of handheld form factors for gaming PCs.  We’ve seen quite a few of them, in fact, like the Switchblade and the Blade.  This year, they have a final model called Razer Edge that just made its debut at CES.

Originally nicknamed Project Fiona, the Edge has been designed and redesigned with the help of crowdsourced input from Razer’s community of fans.  The resulting machine consists of a full fledged gaming PC housed inside a tablet form factor that you can slot into a controller case (yep, the controller is no longer integrated into the body as with the original design) when you want to partake in some handheld gaming. 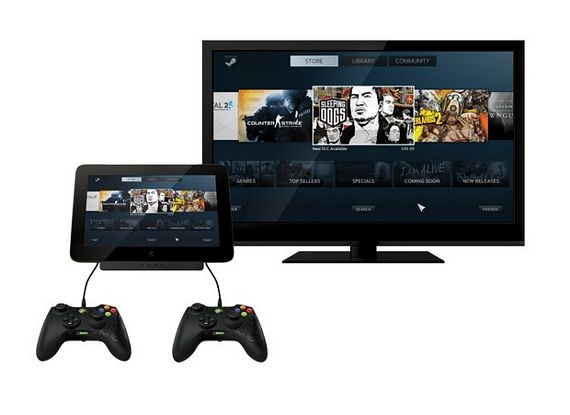 The Razer Edge packs a 10.1-inch capacitive touchscreen display (1,366 x 768 resolution) capable of handling all the multi-touch tricks in the preloaded Windows 8 operating system.  Specs include a 3rd-gen Intel Core processor, a NVIDIA GT640M LE GPU, up to 8GB of DDR3 RAM, USB 3.0 and SSD storage (either 64, 128 or 256GB).  It’s a proper gaming build, too, rendering DiRT Showdown at 41 fps and Dishonored at 59 fps.  Sure, your desktop rig probably trumps that easy, but for a PC you can play with in your hand, it’s pretty impressive.

Granted, being a sorta-run-of-the-mill Windows tablet (at a time when the Win 8 slates have started dropping) makes it a little underwhelming, but the unique handlebar controller case, which features analog sticks and a collection of action buttons on either side, should make up for it.  Aside from the controller dock, you can also get a separate keyboard dock, 40Wh battery packs and a docking station with a bunch of connectors (USB, audio, HDMI).