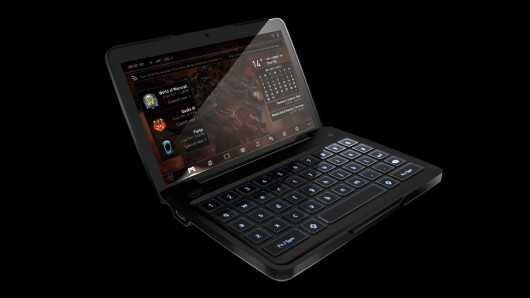 Want to take your favorite PC games out on the road with you?  For the longest time, your only likely option is investing in a bulky gaming laptop — you know, one of those large “portable” computers with beefy CPUs and powerful graphics cards.  The Razer Switchblade might change all that.

A concept device shown off at CES this week, the portable gaming machine takes on a netbook-like form factor that you’re supposed to play with both hands, just like a regular handheld gaming console.   It measures a compact 6.77 x 4.52 x 0.98 inches with the lid down, which makes the case for handheld play perfectly plausible. 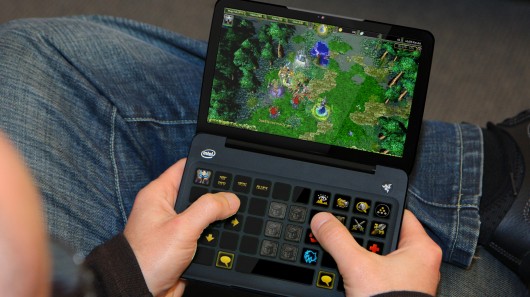 The Razer Switchblade has a 7-inch capacitive touchscreen display (1,024 x 600 resolution), which allows it to ditch a trackpad for on-screen controls.  Instead of a regular QWERTY keyboard, though, it has a series of transparent buttons with an LCD under them.  That way, the buttons can be automatically reconfigured for gaming labels, depending on which title you’re playing.  There’s also a USB 3.0 port, in case you’d rather stick a real mouse onto it.

In order to play PC games, this will need to have some power and that’s where things become a little questionable.  According to Razer, the device has an Intel Atom-based CPU, paired with an undisclosed GPU ensemble for processing all those graphics.  Other details of the device include a 128GB SSD, 3G, WiFi and an HDMI out.

Hopefully, the Razer Switchblade won’t just turn out to be a glorified netbook if it ever does make it into production.  Whatever results they end up getting with this ambitious effort, though, that label-changing keyboard  looks awesome.  Nothing concrete about dates or prices, so this will likely take a while.