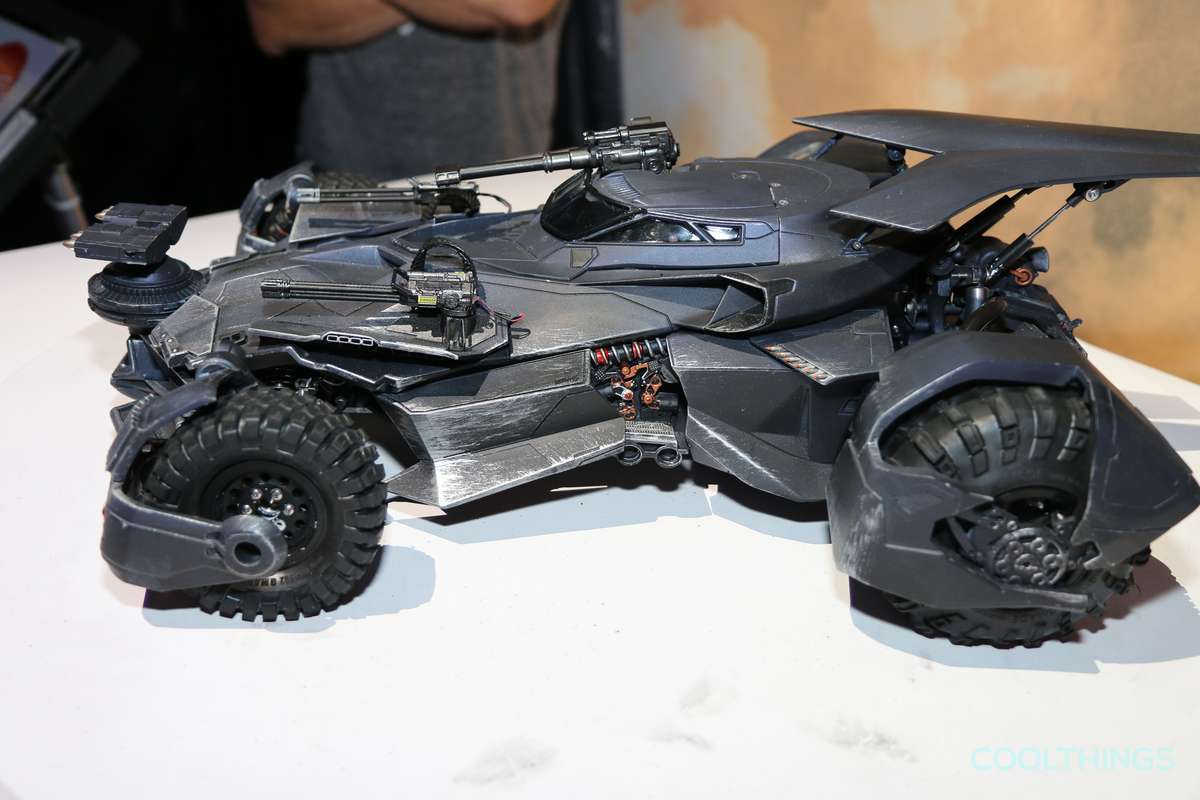 The bad news? We’re still not all that optimistic about the upcoming Justice League movie. The good news? If the darn film is anything like Mattel’s Justice League Elite-Tek Batmobile, then the whole thing will be absolutely epic.

A miniature remote-controlled replica of the car from the Justice League movie, this has to be the most detailed Batmobile toy ever made. It’s big, too, coming in at a 1/10th scale, so it will make for quite the imposing presence, whether you drive it down the kitchen, the local park, or a miniature replica of Gotham City.

More than recreating every line, curve, and angle on the movie vehicle, the Justice League Elite-Tek Batmobile ups the realism by throwing in exhaust pipes that bellow actual smoke. No, it does not use a nitro gas engine like some higher-end RCs. Instead, the darn thing has an oil-based vape inside producing the exhaust, which starts up the same time the car is turned on and produces a roaring engine sound. We’re not sure if you can take a puff on the vape, but you’re probably welcome to try. Suffice to say, if you want to make your own DIY Batman movie, you won’t find a better miniature prop than this.

Of course, you can’t have a superhero car without weapons. That’s why this one comes with a rocket launcher right on the nose, a pair of Gatling guns on the hood, and a cannon blaster right on the roof. All the weapons on the hood are designed to move along with the wheels, too, giving you a way to aim when launching an attack on a cache of Gotham’s finest villains.

Opening the cabin reveals a nice surprise: they actually have a Batman action figure driving the darn thing. It doesn’t just sit there stiff as a Dark Knight corpse, either, as the action figure actually moves the steering wheel, steps on the gas pedal, and even shifts the gear for realistic driving motions. Oh yeah, even the dashboard lights up in response to different actions for some fun interactivity, while a special “jump mode” elevates the car with hydraulic-like movement for added flair.

Sadly, the Justice League Elite-Tek Batmobile doesn’t come with a controller, so you’ll have to make do with a touchscreen-based control pad on the companion app to operate the car. While that should make it a little harder to drive, it does bring one great benefit: first-person video. That’s right, the Batmobile is armed with a Wi-Fi camera (it’s mounted over Batman’s shoulder), so you can feel like you’re the Dark Knight patrolling the mean streets every time you take it out for a drive. Oh yeah, the app stitches augmented reality right into the feed, too, so firing the integrated weapons will generate muzzle flashes, flying projectiles, and other cool effects.

Want one? The Mattel Justice League Elite-Tek Batmobile is slated to come out in October, with a pre-sale happening at Comic Con. Price is $250. 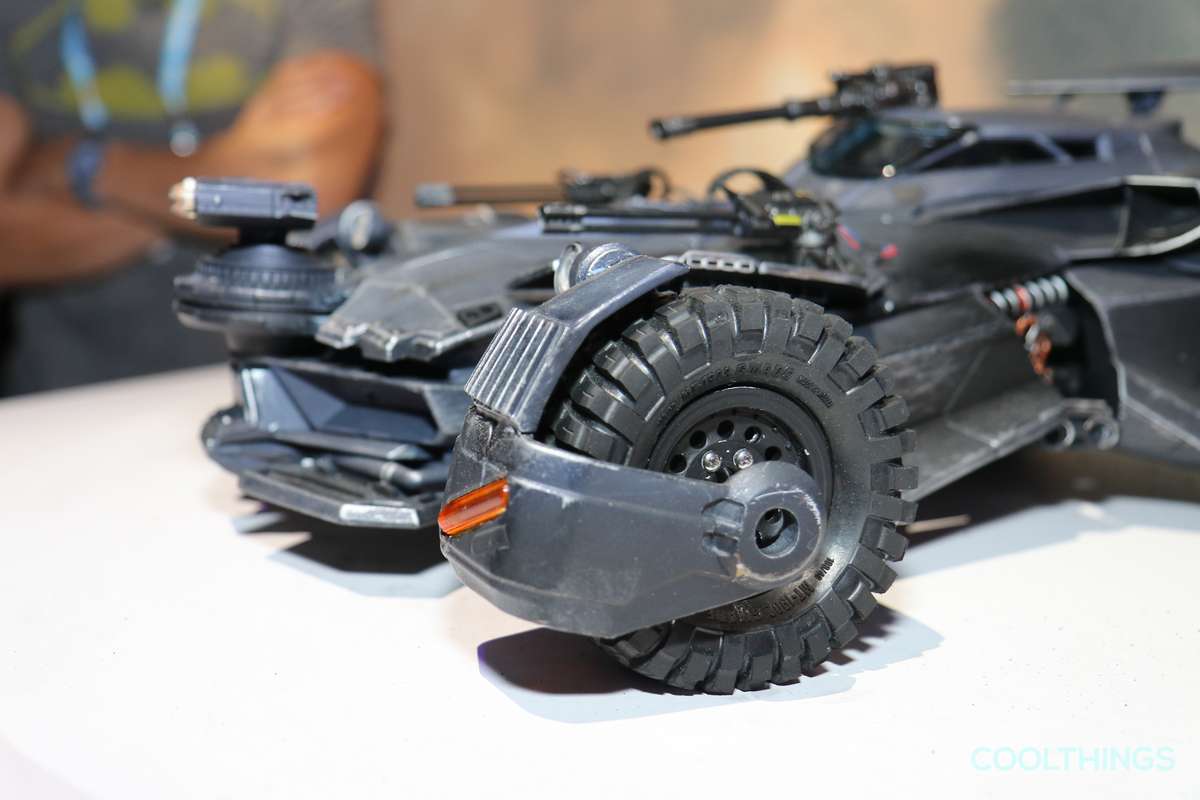 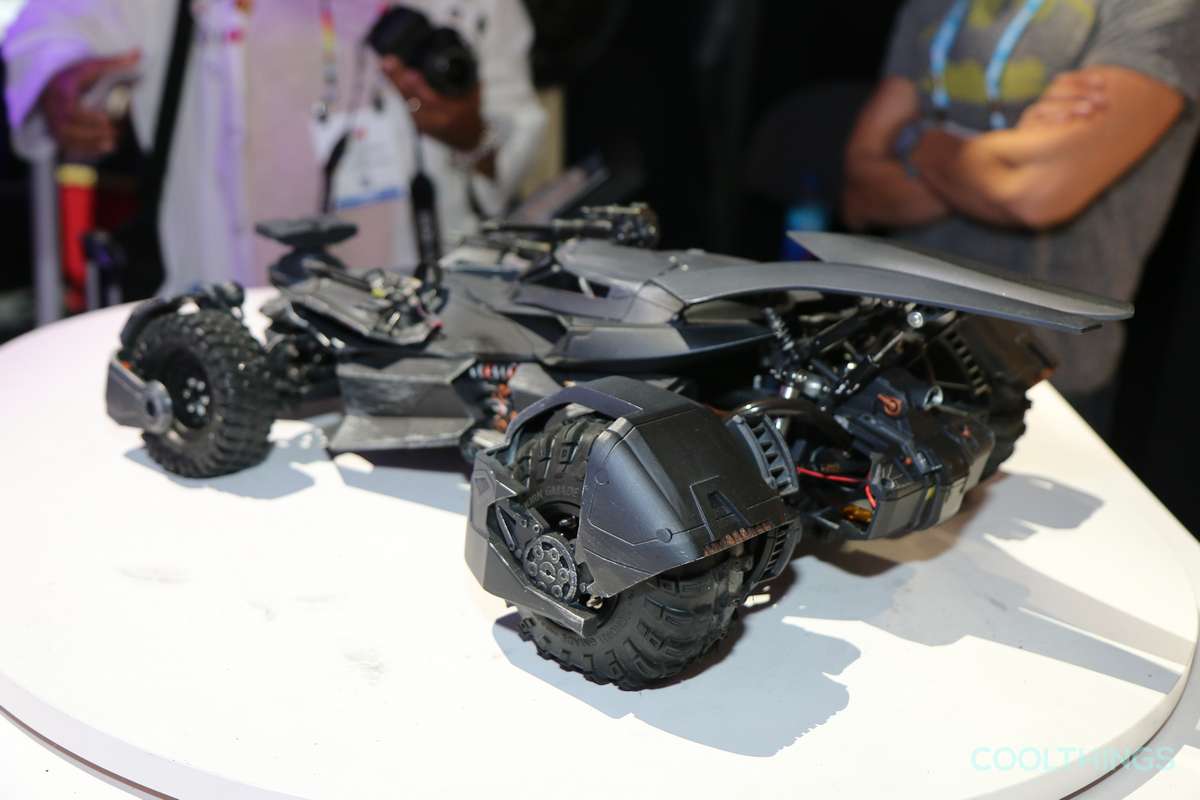 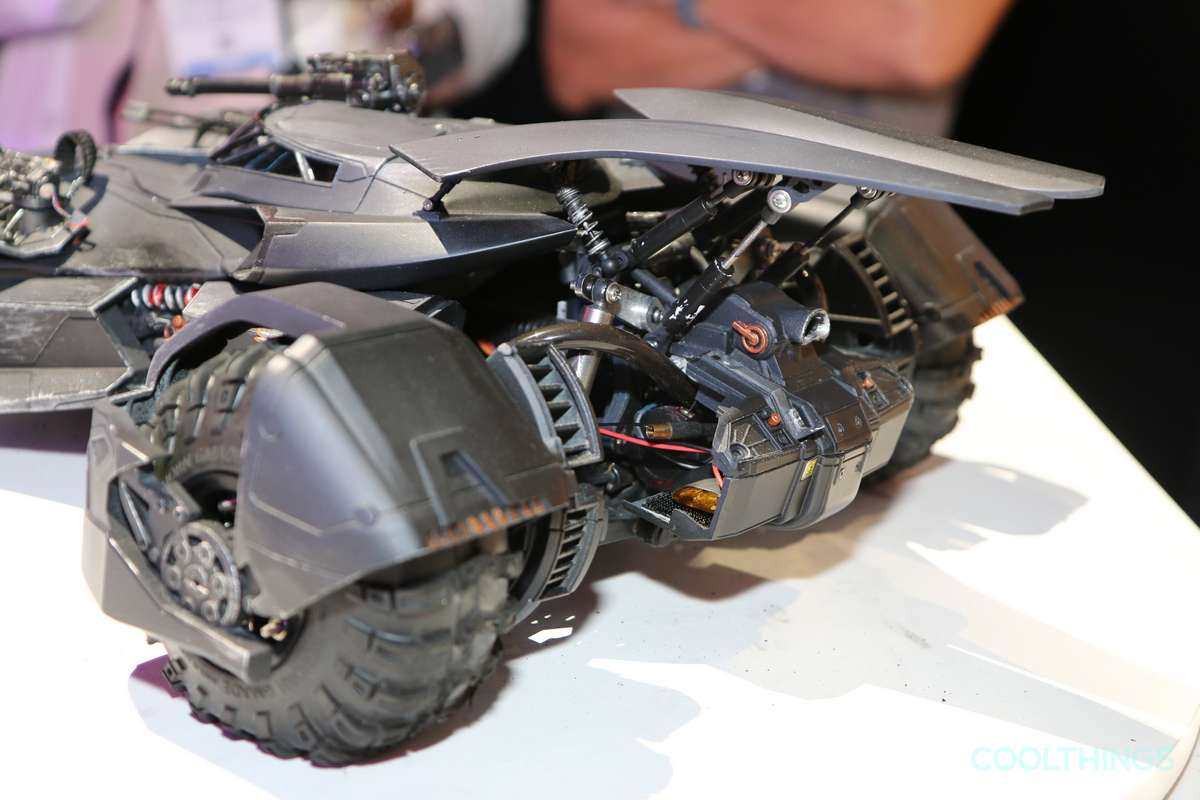 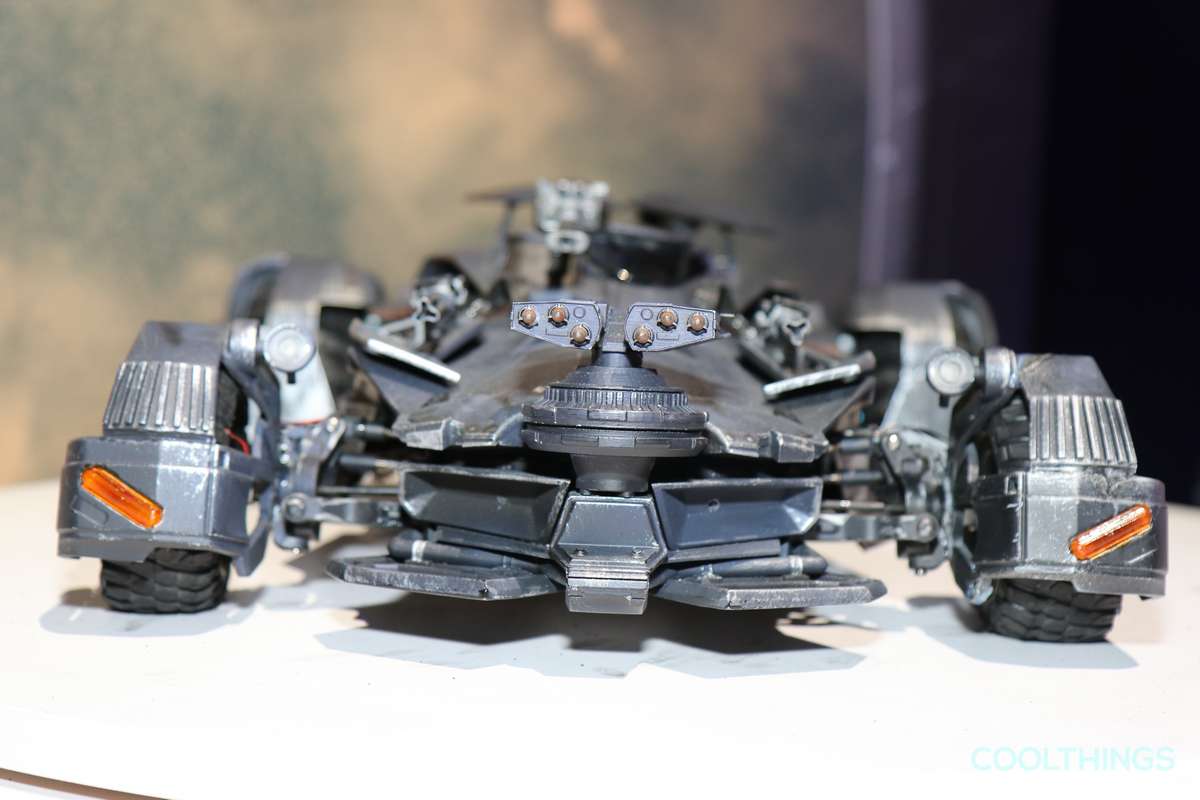 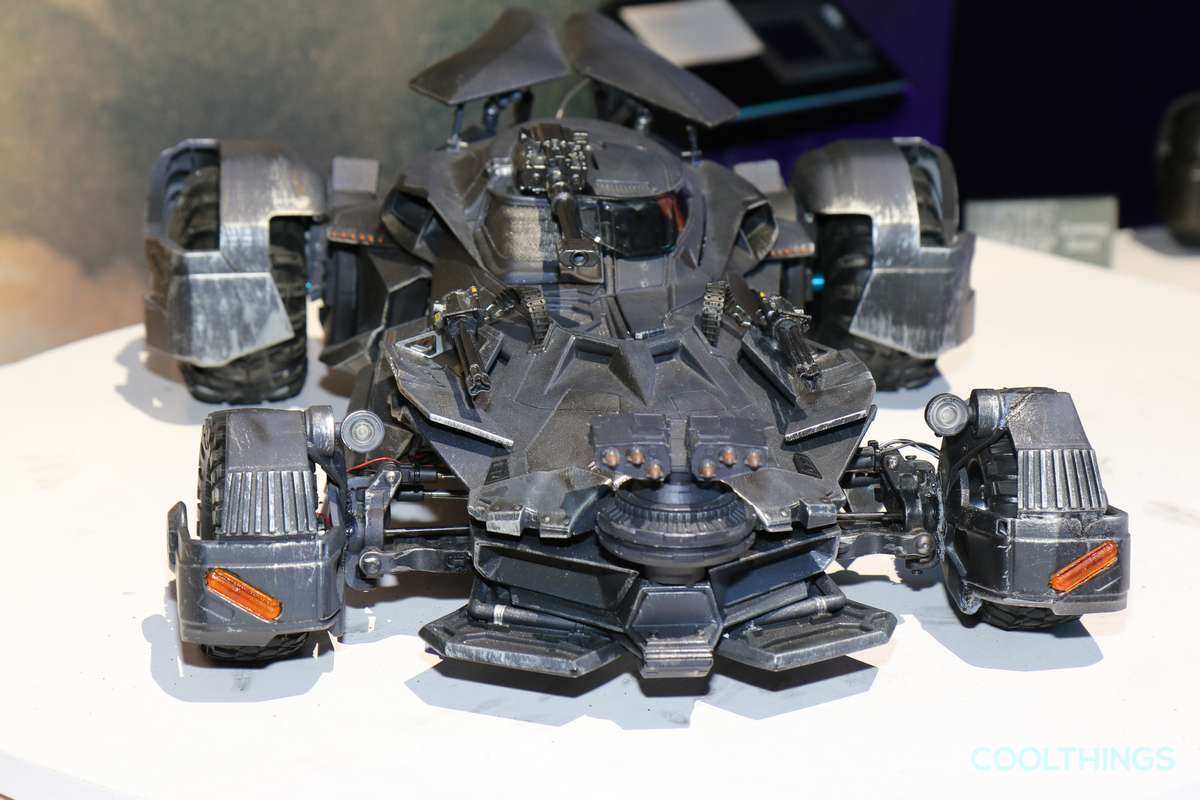 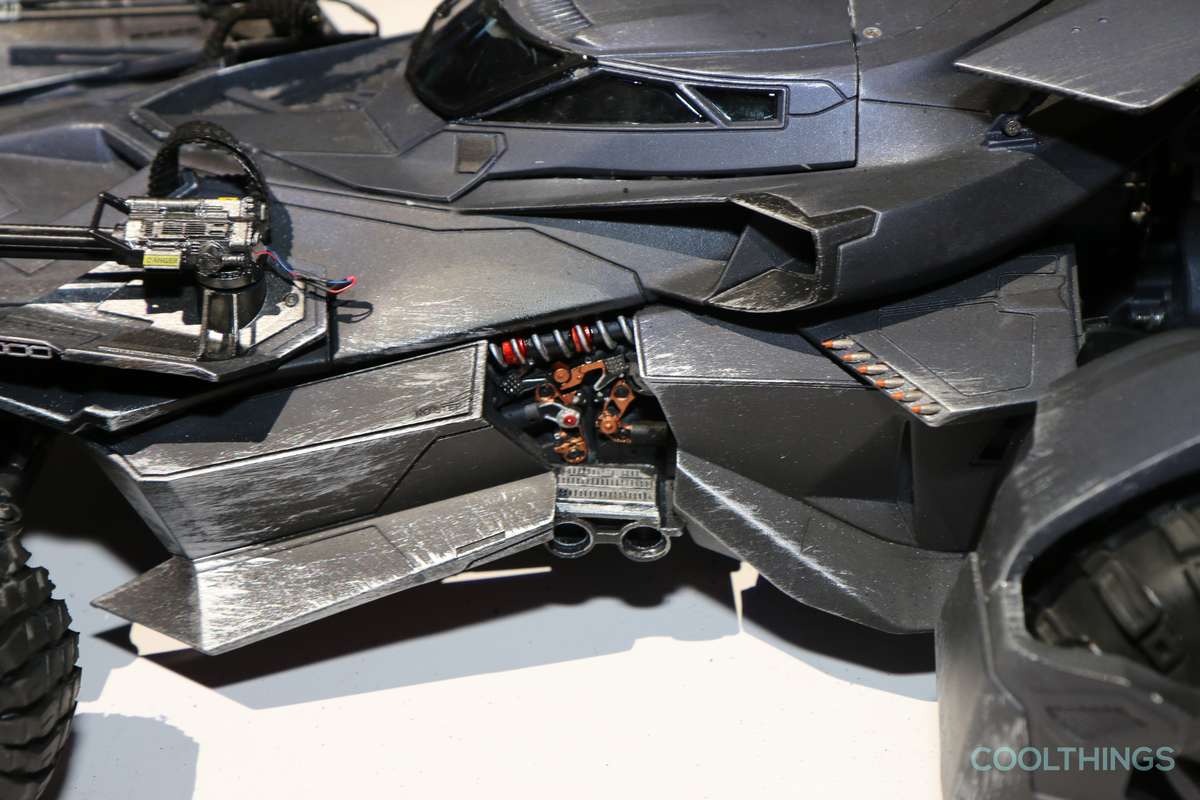 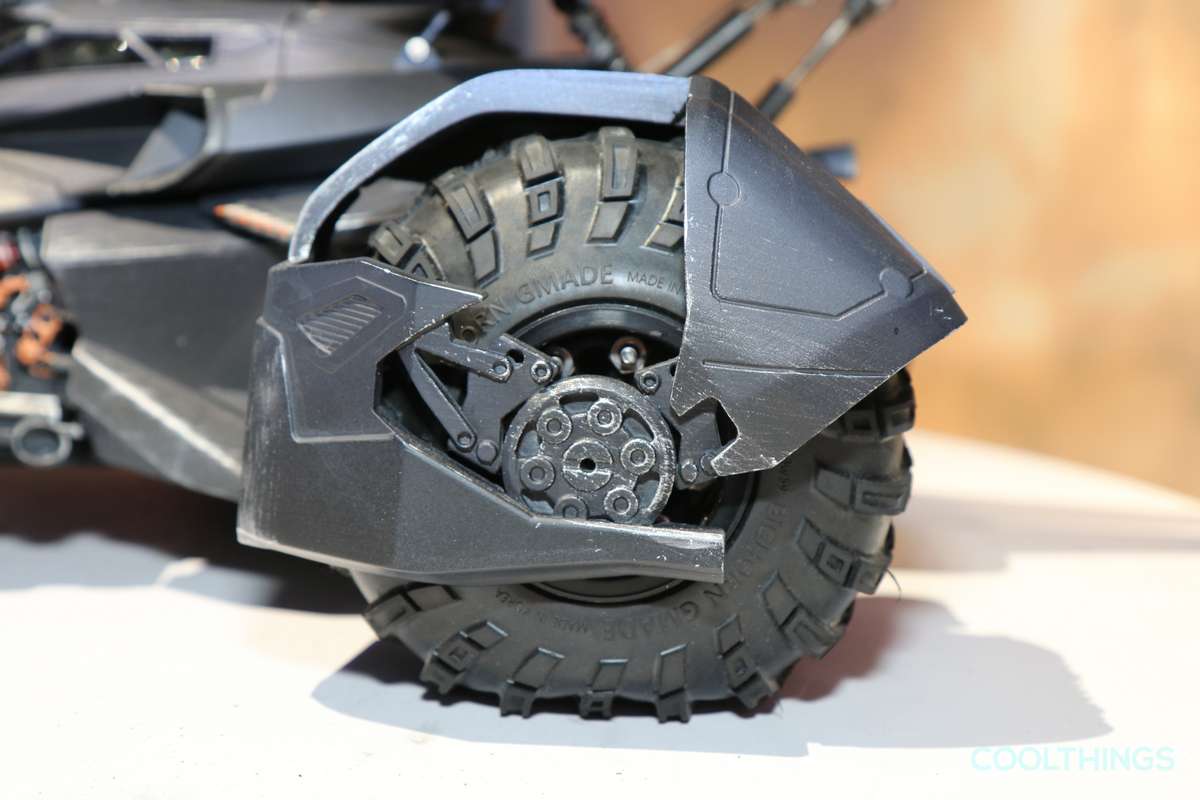 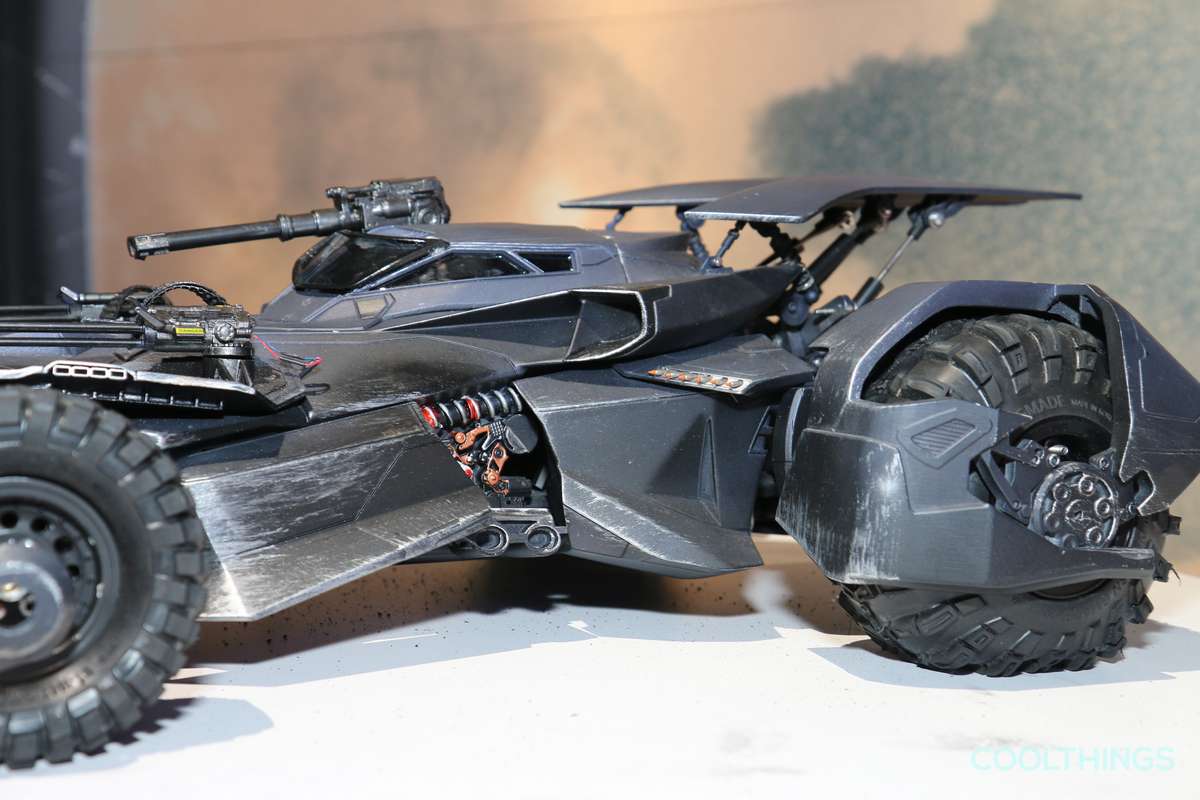 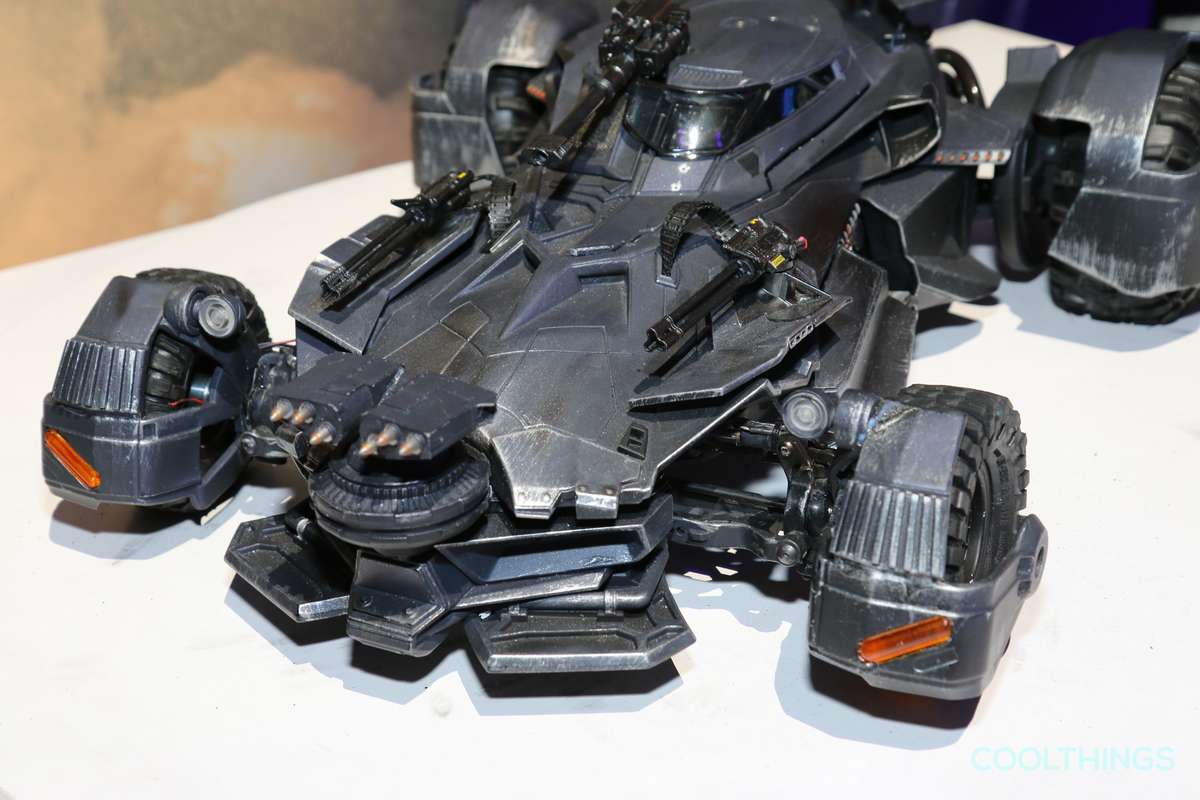 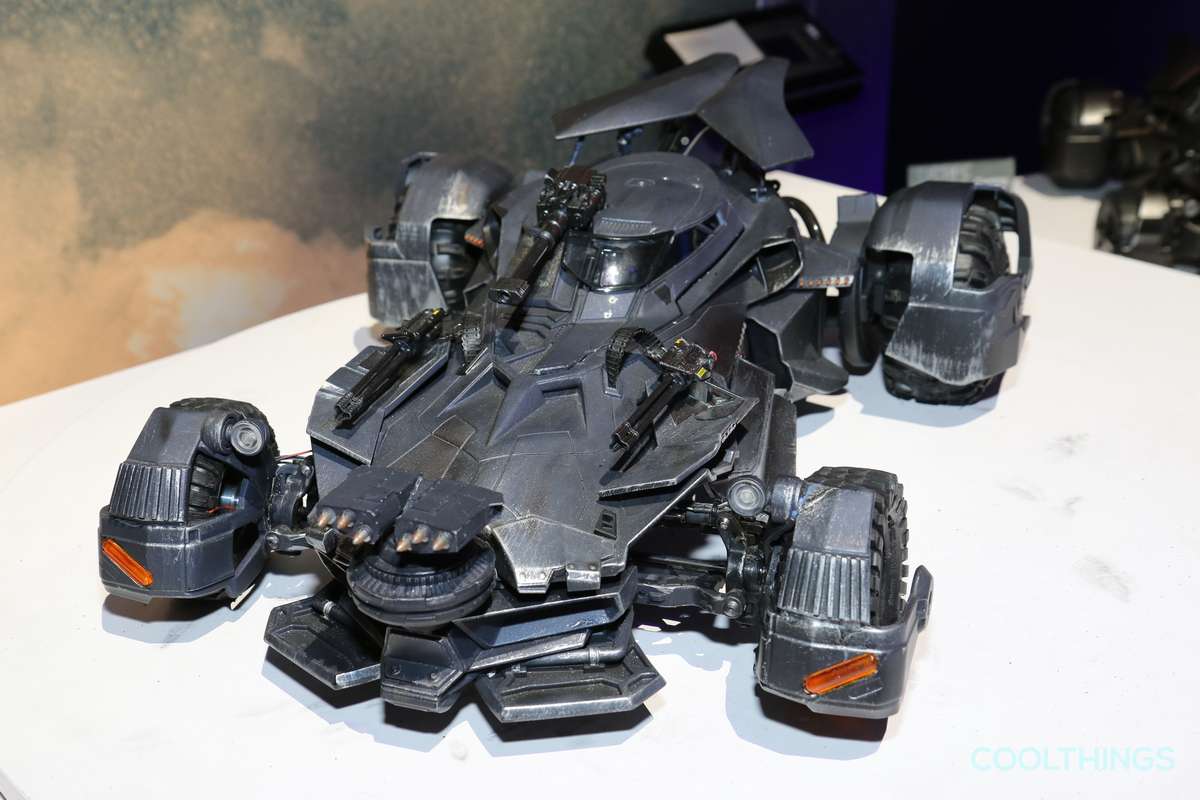 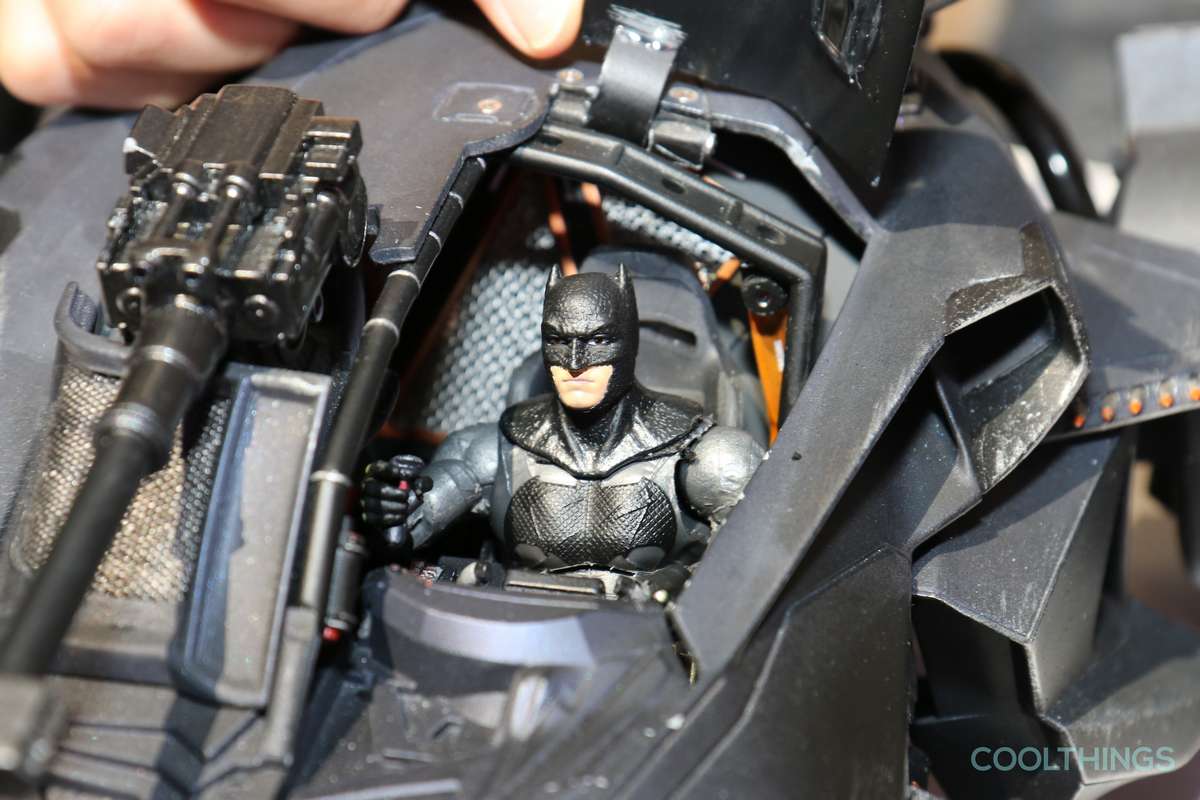 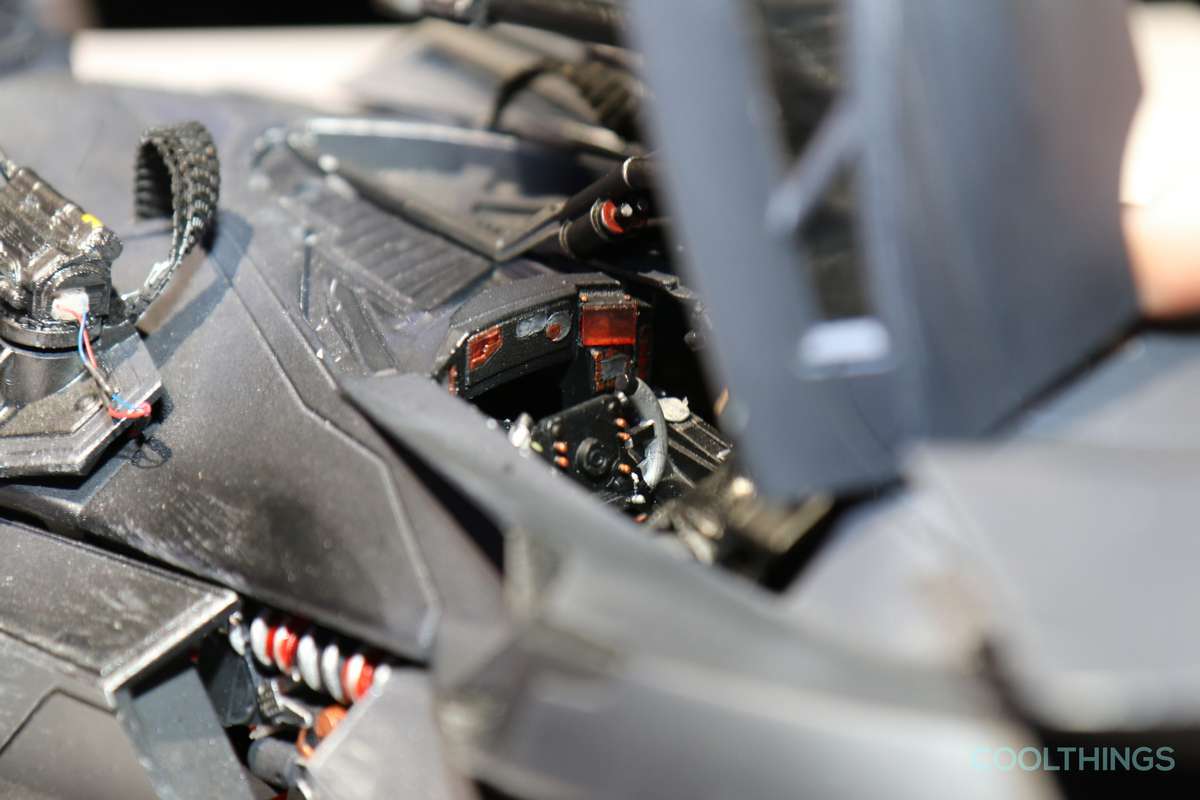 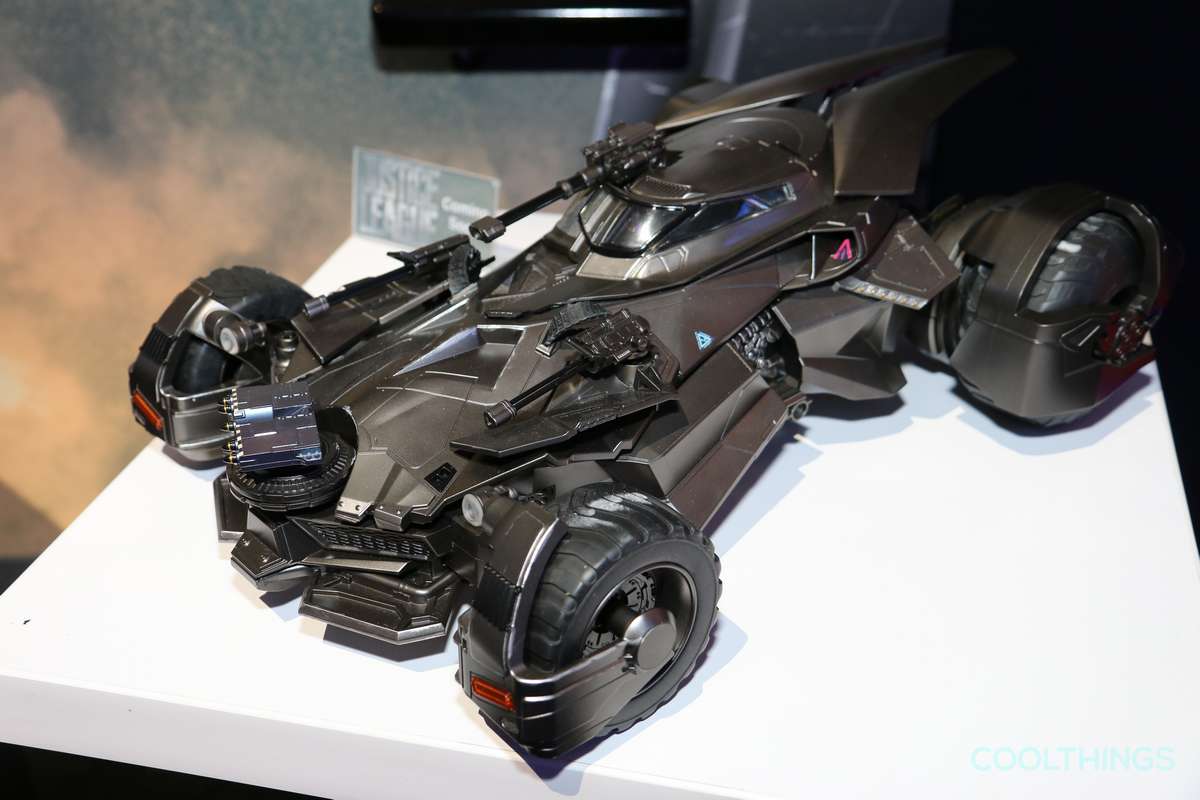