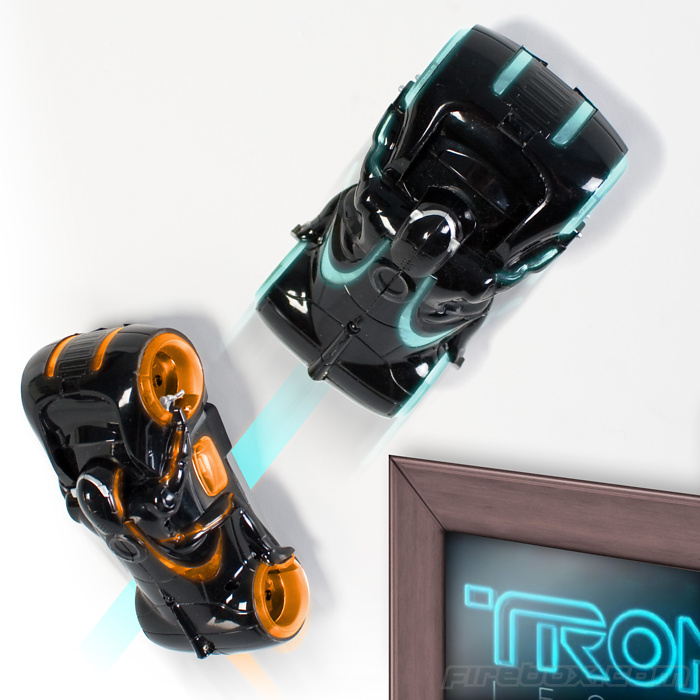 Didn’t quite manage to raise the funds necessary to secure one of those custom-built Tron Light Cycles?  Here’s something that’s lighter on the wallet and is almost as awesome: the remote-controlled Zero G Light Cycle that can drive on walls and ceilings.

Created by Air Hogs, the miniature movie replica (it measures 2 x 2.5 x 4.5 inches) appears to sport a wider profile than the ones in the film.  No harm done, though, as the thrill is in the unconventional driving, which mimics the gravity-defying antics of Sam’s and Clu’s futuristic motorcycles in the upcoming Tron Legacy.

The RC Zero G Light Cycle uses an electric vacuum on its underside, which creates a massive downforce, to stay affixed to the surface even when it’s running vertically or upside down.  Not only that, it emits trails of light while running that can cause a second Light Cycle to fall off if the driver mistakenly steers into it, making for an exciting racing battle that could end with somebody’s broken Light Cycle – boo-hoo.  It comes with a twin-toggle control board that doubles as a charging unit for the vehicle’s rechargeable battery.

You know you’ll end up with a few Tron Legacy merchandise eventually.  Might as well start early.  The RC Zero G Light Cycle is available now for £34.99 .