Reality Reading: Like Reality Shows, Except You Read It And It’s About You 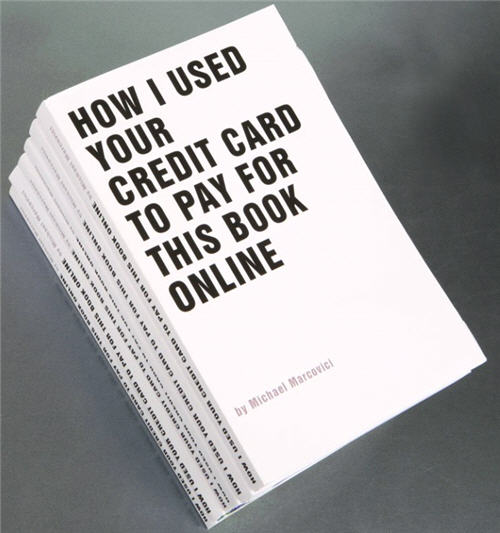 Michael Marcovici is a smart ass.  How else would you describe a guy who steals your credit card information, uses it to buy a book and ships them to you?

Guaranteed to leave you scratching your head upon receiving the parcel, he uses you card to buy a book that he wrote himself.  Titled “How I Used Your Credit Card To Pay For This Book Online,” it details the process of how he stole your credit card and used it to make a purchase from the web.

Whether to label the whole thing a felony, a prank, a performance art or something else is currently beyond me.  It’s like a reality prank show without the cameras and you’re right smack in the middle of it.  Suffice to say that the idea seems pretty cool, unless, of course, you’re the one whose credit card is being compromised.

He wrote the book himself, along with a co-conspirator who wishes to remain anonymous, back in September of 2008.   From that time to January of 2009, they stole the credit card information of 100 people and used it to purchase the book for $9.99 from their own online storefront.  The book has been sent out to all 100 compromised cardholders, each one reacting differently to what happened.

According to Michael, 92 of the 100 people have been able to receive the book.  Of that number, 10 have asked for a refund, 14 have complained but have since calmed down, 44 have remained quiet and two have threatened to sue him.  He spent close to $3,000 to settle the matter with those that brought lawyers into the situation.

Each book is personally signed and numbered by the artist himself.  Michael also claims there are no more copies of the book in circulation, which means the 100 sent out are the only remaining prints, making this somewhat of a rare edition.  How would you feel if it was you put in that unusual situation?

[Art by Marcovici via Limited Hype]