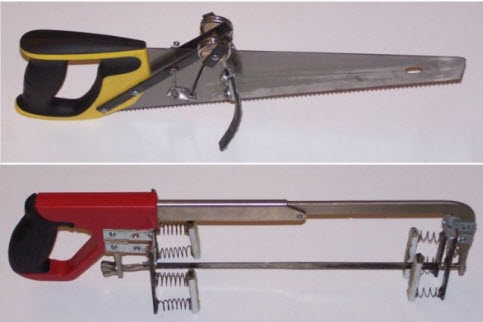 Using hand saws to cut through anything is a lot of work.  That’s why God invented power tools.  If you only need to slice through wood on occasion, though, an expensive electric saw is usually too big a purchase to justify, so you make do with a manual hand saw.   If the Recoil Saw finds its way to the market, you just might get another option.

Created by John Zimmerman, it’s basically a regular hand saw fitted with a spring-based contraption that lets it store and release energy in short bursts.  The idea is that the spring will compress at the end of each sawing stroke, with the pressure released at the start of the return stroke.  According to the inventor, this energy will help push the next stroke, requiring less actual effort from your arms.

He currently has two Recoil Saw prototypes: a panel saw for wood and a hack saw for metal.  Both come fitted with a recoil device to enable energy boost, which is actually just a cushioned impact bar that’s attached to one or more springs.  Zimmerman thinks the same design can be adapted to most any type of manual saw and has even gone so far as sketch designs for a pruning saw and a file.

Because the recoil action will automatically transition you to the next stroke, the rigged-up hand saws can do the same work in less time compared to their off-shelf counterparts.  That, of course, aside from creating less strain on your arms.

John is in the process of seeking out hand tool manufacturers that are interested in licensing the Recoil Saw design, which is currently pending a patent registration.