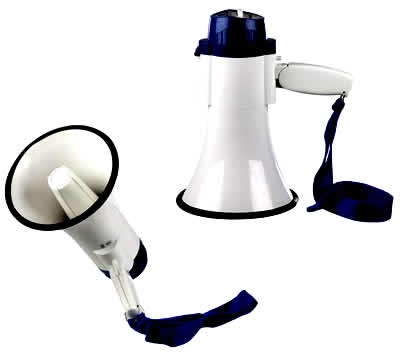 Have a grievance you want to air?  Do it over and over (and over) with the Recordable Supporter’s Megaphone, a voice-amplifying contraption that lets you play recorded messages, so you don’t have to abuse your vocal chords in order to be heard.

Whether you’re holding a peaceful protest to speak out against foreign policy or rallying your fellow supporters for the Inter-College Pogo Racing Championships, a megaphone should prove indispensable to letting people know what’s on your mind.  Problem is, you probably end up passing it to someone else after a half hour of vigorous shouting, as your voice begins to show cracks from all the strain.

The Recordable Supporter’s Megaphone saves you from all that.  While it can be used as a regular megaphone that turns your irritating squeaks into a deafening roar, it adds a secondary function that records and plays anything you want it to.  That lets you hold off on having to scream the same sentiments repeatedly, accomplishing identical results with just the push of a button.

About 25 centimeters long, the loudspeaking device manages up to 15W of output, which should be plenty loud for anyone in the vicinity to hear.  It operates with four D-sized batteries, allowing for up to eight hours of broadcast time.  There’s also a siren function onboard, in case you just want to make irritating noise without saying anything.

Agitating people isn’t all that difficult.  Having an automated megaphone that plays the same amplified message for eight hours straight makes the process ridiculously easy.  The Recordable Supporter’s Megaphone is available now for $22.