Red Sox vs. Yankees Chess Set For Baseball Fans In your Life 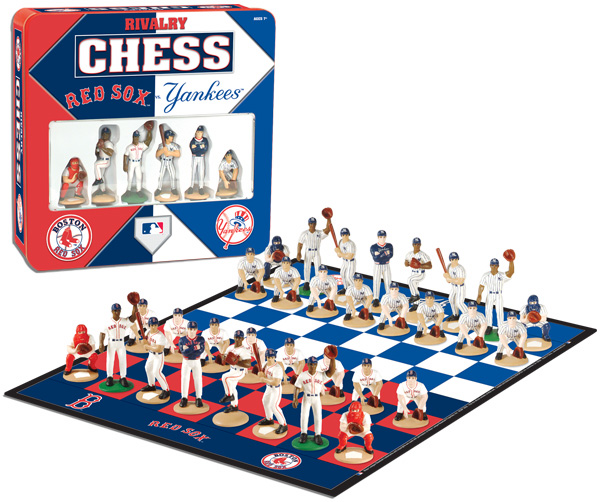 Baseball is America’s national sport, and no rivalry sums up the competition and desire associated with this game more than the one between the Boston Red Sox and the New York Yankees. For years they have battled it out for supremacy, with some of the recent encounters going down in the annals of time.

Now those that love either of these teams – or just the sport in general – can treat themselves to a chess set where the different players represent each side of the board. Although no players’ appearances are copied in the set, those with an active imagination will be able to move around legends such as Babe Ruth and Joe DiMaggio, as well as modern day greats such as Alex “A-Rod” Rodriguez and David Ortiz.

There really is no better way to keep the spirit of the MLB alive during the long winter breaks, as well as reliving some of the closely fought games as the season goes on. For those that really miss the action of the on-season, then this is a must have as they wait for it to return.

The board itself is made from strong material, which will not damage easily over the years. The squares are colored in the same colors that the opposing teams wear, with the Boston ones being red and blue, and the NY Yankees ones being blue and white. The different players that represent the chess pieces are also painted to a high standard.

Each chess piece is represented by a different position from the team’s lineup. For example, the king is represented by the coach, while the queen finds herself paired with the pitcher. Although the positions chosen are quite random, they are all distinctive and therefore make the game easy to play.

The game comes in attractive packaging which will keep all of the contents protected from any bumps or bangs. This is very important as this product is actually licensed by the MLB and therefore those that are kept in good condition good be collector’s pieces in the future.

At the low price that this novelty chess set can be bought, there really is no excuse for a baseball fan not to have one in their collection. Even if they aren’t chess fans, it will still look great on any table or display case – it could even be used for the uninitiated to learn the game on.