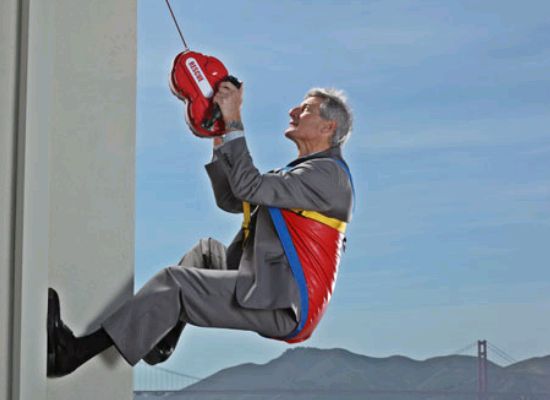 Paranoid much?  Allay your nervous fear of being trapped atop a high-rise building with the Rescue Reel, a device intended to help you vacate your office at the 30th floor in case of emergencies (without resorting to jumping off the window and hoping you’ll survive).

The naming is supposed to be a take on the fishing reel, from which the escape contraption reportedly derived its concept.  Looking at it though, getting down via the Rescue Reel looks a lot more like rappelling.  Whatever the deal, it mimics the way Batman will probably try to make it down if he found himself trapped on top of a burning building with no means of escape apart from an open window.

With the Rescue Reel, you get a portable dual-hand grip device with an anchor on one end and a one-size-fits-all harness on the other, paired with hopefully enough rope to get you down safely (they did a test at a 100 story building, so there should be plenty).  As long as you can find a good place to fasten the anchor, you should be able to make it down without much trouble.

Exactly like rappelling, right?  For the most part, yes, though there’s one major difference that makes it less scary.  The Rescue Reel uses a centrifugal braking system that automatically controls the rate of descent, allowing even those with a relative fear of heights to lower themselves without panicking.  Rate of descent is around two seconds per story, which is pretty good considering the alternative route of hitting the fire exit.  In case the brake fails, it also comes with a manual brake lever – a feature those a little more daring will probably enjoy playing with, when they hold “practice sessions” to try the Batman-worthy contraption out.

Having recently concluded its testing, expect the Rescue Reel to become available sometime next year.  Price is projected to be around $1,500.