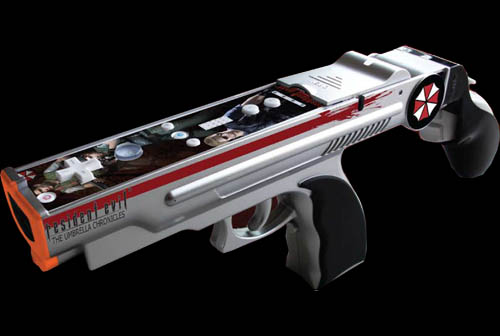 Did you miss getting a Resident Evil Shot Blaster back when the Umbrella Chronicles was selling like brains to zombies?  If you tried getting it any time recently, you probably discovered to much chagrin that it was sold out everywhere.  Even worse, there were no stocks coming, as the Wii accessory had been laid to rest.

You can stop fretting now.

Capcom Store is bringing the Shot Blaster back, looking like the same bad ass gun it has always been.  It’s fashioned exactly as the original weapon designed to eradicate zombie infestations.  Actually, it even uses the same packaging, complete with The Umbrella Chronicles label.  Did Capcom just not bother to redesign the stickers or did they actually hoard a ton of these things?

Either way, it should work with the upcoming Resident Evil Darkside Chronicles, along with most any other shooting games on the Wii.  Gamers get a built-in cord management system, full access to all controller buttons, snap grip reload (just cock it up and down) and quick-detach nunchuk.  It can play in two customizable modes – as a one handed pistol or a two handed shot blaster.

The Resident Evil Shot Blaster has been available since the second week of April, priced at $24.99.

[Capcom Store via The Nintendo]