Resident Evil Zombie T-Shirt Will Make You Want Some Brains 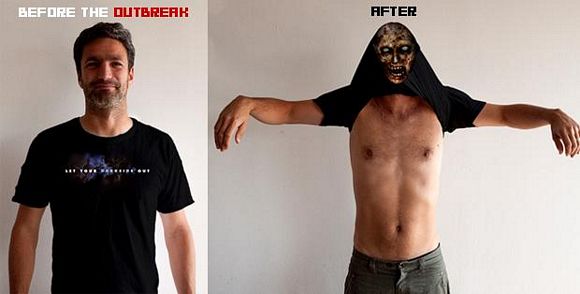 Regardless of feelings you harbor for your favorite piece of clothing, I doubt it’s ever going to measure up to the free shirt Capcom is giving away at the upcoming Comic Con in San Diego next week.  The official Resident Evil: Darkside Chronicles merchandise can turn you from a regular t-shirt wearing guy into a brain-eating zombie in a jiffy.

A freebie shirt that doesn’t suck is a rarity these days.  One that blows away every other t-shirt you’ve owned is usually quite a stretch.  However, have you ever really seen anything this awesome?

Worn in a normal way, the shirt looks like your standard game-related giveaway, with some boring graphics and fonts.  Pull it over your head, however, and it turns up a zombie head print on the other side, making you look no different than the infected creatures you’ve been mercilessly blowing to pieces since the first Resident Evil title rolled out on consoles worldwide.

Like all free things, of course, there’s a catch.  The shirt will only be available from Comic Con and will not be for sale (at least, for now).  Instead, you can grab one for you and a friend (both of you need to be aged 17 and above) by playing a co-op level in the M-rated game during the show.  Simply finish the stage and you can go home with the option of turning into a zombie virtually any time you like.

Attend Comic Con, play a free level of an unreleased game and get the coolest shirt ever?  Expect long lines at the Darkside Chronicles playing area because of this.  Well done, Capcom, well done.