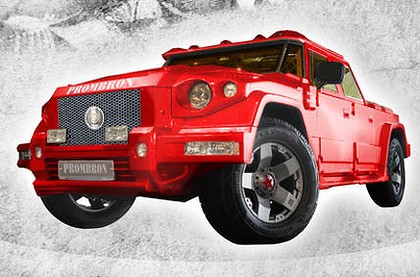 How do you make an SUV, in itself an already excessive vehicle, even more over the top?  Throw in gold-plated windows?  Meh.  Declare the engine “rocket grenade proof”?  Mmm.  Use whale penis leather for upholstery?  Uh….what?

Yep.  You heard that right.  Castrated, turned to leather and used to deck the interior of the Dartz Prombron Monaco Red Diamond Edition.

Billed as the world’s most expensive SUV, the fully-armored car is bulletproofed from head to toe (yep, the 400 kW V8 engine is supposed to survive through rocket grenades).  Built by RussoBaltique, who also outfitted ultra-safe cars for notables such as Tsar Nicholas, Vladimir Lenin and Leon Trotsky, you can rest assured it will get past your run-of-the-mill kidnappers toting lame machine guns.

More than the protective features, though, the Dartz Prombron has been decked in a couple of notable excesses.  In particular, it boasts of gold-plated bulletproof windows, tungsten exhaust pipes, Kevlar-coated exteriors and precious stones (diamond and rubies) on the gauges.  Taking the crown, though, is the lush interior upholstery, made entirely from whale penis leather.

Not sure how many whales had to lose their reproductive organs for each car, but it’s probably not a lot, given that those mammals supposedly grow their “manhoods” up to 2.4 meters (take that, Ron Jeremy).  According to RussoBaltique, this same material has been used by renowned shipping magnate Aristotle Onassis on one of his most famous yachts, the Christina O.

The Dartz Prombron Monaco Red Diamond Edition weighs a hefty 4 tons, but should lighten your bank account easily at the $1.6 million asking price.  It’s being primed to make a debut at the Top Marques Luxury Motor Show in Monaco in 2010.