Rex, A Robotic Beast Of Burden 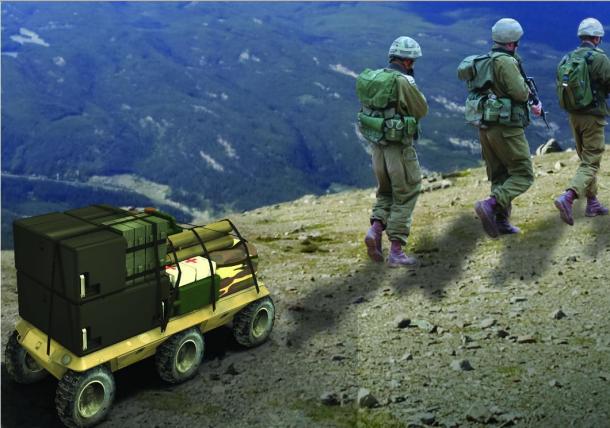 Why carry bags when the robots can do it?  That’s the idea behind Rex, a load-bearing robo-mule that will trail you and respond to voice commands like a well-trained mutt.

Created by Israel Aerospace Industries, the baggage-toting machine is currently being marketed to military organizations in an effort to fill an “urgent operational need.”  According to the company, the robot will relieve in-field combatants of the encumbrance created by putting heavy loads on their back, allowing them to perform their work in the field unimpeded.

Described as a “robotic beast of burden,” Rex can carry over 400 lbs of cargo while rolling on six small wheels, relieving soldiers of having to carry heavy loads of ammunition and supplies.  No need to lead it around on a noose either, as it can be programmed to follow the lead soldier at a safe distance.  Even better, it can respond to voice commands, such as “stop,” “fetch” and “heel,” allowing you to operate it without the need for a separate console.

Rex can go up to 72 hours without refueling, allowing it to be useful on short operations.  How well it performs on rugged terrain, of course, may prove a bit more questionable, especially with 400lbs of heavy artillery sitting on its platform.

In all honesty, this thing looks more sensible on non-field uses, like in cities, airports or construction sites.  Heck, I’d love to have a robo-mule follow me around, carrying my HDTV, Xbox 360 and a large battery everywhere I go.  Anytime I feel like it, I can just sit down to play a quick game.  That will put an end to handheld gaming consoles forever!