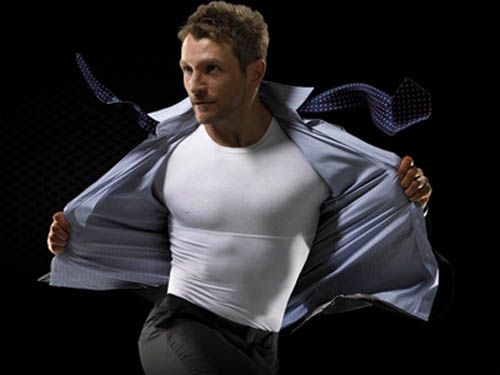 Push-up bras and corsets are only two of the many false advertising machinations women have been afforded with ever since I can remember.  Now, men have their own version.  The RIPT Fusion shirt gives you the appearance of a bodybuilder’s physique without having to spend a single second in the vicinity of a fitness trainer and protein shakes.

Described as “a classic men’s undershirt injected with steroids,” the RIPT brings all the necessary traces of muscle to misshapen men worldwide.  Whether you tip the scales on the skinny or the flabby end, you’ll be toting muscle-bound pecs and abs just by  putting the garment on, allowing you to fake it the exact same way your last girlfriend fooled you into thinking she had a 24-inch waist and a C-cup.

Much like a corset for guys, the body-sculpting “muscle shirt” straightens your back and straps your flabs into a hidden form, all while adding the necessary outlines to make it seem like you played one of the Spartans on 300.  It’s really a shirt, too, and comes in both a crew and V-neck design.  It’s made of 100% cotton, coupled with a body panel (which hides your junk food excesses) made from 79% polyester and 21% spandex.

The deceptive material, of course, is intended to go under a jacket or a button shirt, though the more  adventurous can probably try strolling down the streets with it.  It looks authentic enough, provided you get a size that fits you.  The last thing you want is to be packing ripped chest and abs while your lovehandles scream to pop out from the sides.

At the least, the $58 RIPT Fusion shirt levels the playing field in the physique department.  Now, if we can only do something about your personality, all your problems will go away.