Conquer Westeros With The New ‘Risk: Game of Thrones Edition’ 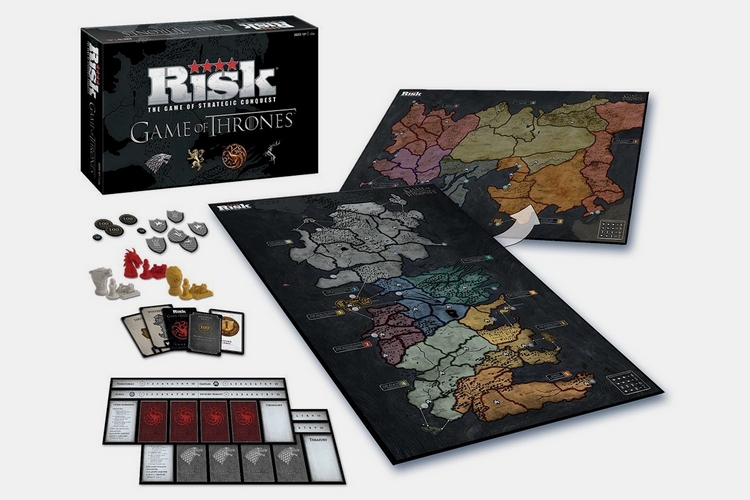 It’s a long, long wait before Game of Thrones returns for its next season. What’s a fan who’s already binge-watched the entire series multiple times to do until then? We guess playing a game of Risk: Game of Thrones Edition should help tide everyone over.

Made by USAopoly, the officially-licensed board game brings Risk’s classic strategy gameplay to the quest for the Iron Throne. That way, you can skip spending your time in internet forums, pontificating about what future events may transpire during the series break, since you can play any of the seven houses and fashion your own adventure to decide the fate of the Seven Kingdoms.

Mimicking the show’s grand scale, Risk: Game of Thrones Edition comes with a whopping 650 game pieces that you can play on any of two separate game boards, one depicting the landscape of Westeros and another focusing solely on Essos.   Players can engage in any of three battles: Dominion (where you play as either House Martell, Stark, Baratheon, Lannister, and Tyrell in the War of the Five Kings), Skirmish (House Targaryen versus House Ghiscari for control of Essos), and World at War (all seven houses playing across both maps in an all-out rumble). Players can track progress in every game via their ownership of territories, ports, and castles, along with victory points based on won battles. Other game features include character cards that let you use special battle skills for notable members of each house, territory cards for staking your claim on an area, Maester cards for added wisdom and tactical skills, special unit tokens for additional military deployment, and gold dragon coins. 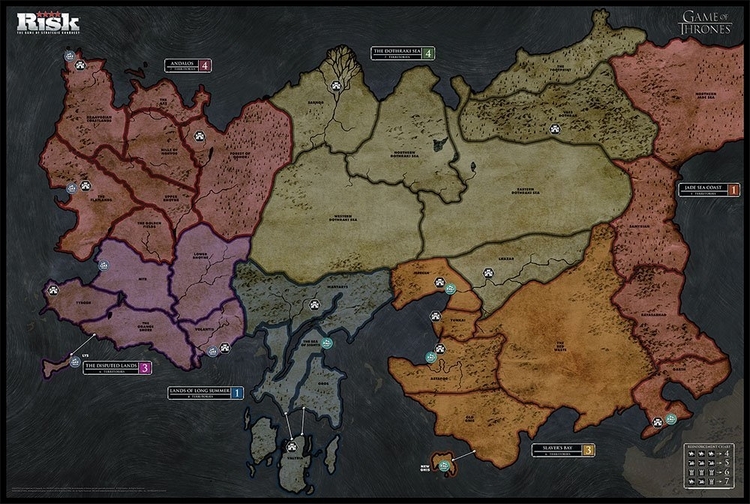 Let’s take a closer look if this is worth adding to your arsenal of board games.

This board game version of The Game Of Thrones comes courtesy of Risk games,  a well known and well reputed brand in the realm of board games. Their products are available worldwide and they have designers based in both Europe and Americas. In the USA, two of the board game big guns that include Hasbro and USAopoly handle the publishing of their games. USAopoly has produced this specific game. They are known in the United States of America for their work on Board games that include the Halo series, Plants versus Zombies and The Walking Dead. The game is squarely aimed at the 18+ Game of thrones Audience.

Quality of the package and Attention to detail – The production value of this game is quite high unlike many other Board games based on comics and TV shows that we are seeing nowadays. The attention to detail with this product is amazing. Everything about this board game is unique. The Map is high quality and is unlike any other board game map on the market. Even the box is of good quality, the box comes with an Easter egg as well. Inside the box cover, you can find the full Map of the World of Game of Thrones. It contains some of the best bits that recent board games have ever seen. The strategy gameplay takes cues from some of the RISK classics.

Instead of just one, the game comes packed with two boards that contain the maps. It has components for around 7 players and each individual will get his very own unique sculpt and a special container that can be used for holding the unit. All 7 families have a unique deck of character cards. The boards are used in a unique way, if you are just playing with one other player, then you can use the normal two-player board. The second board has the ability to handle around three to five players, when required you can use both the map boards for a full seven-player game. The unique character cards and high quality sculpts are a breath of fresh air in the saturated world of board games.

Gameplay – The gameplay is essentially the classic Risk. People who are new to the game can find the set of rules for the game on the instruction manual. The instructions are not very easy to follow. However, once you master them, you will be rewarded greatly. The experience is unlike any other Game of Thrones Board game. On the second board, you can find the three to five players map. On this map, there are ports that surround the land area. All of the ports here are colour-coded to aid in the gameplay. The presence of multiple ports gives rise to a new challenge, with so many ports around you will always have to keep an eye out for surprise attacks. This version provides you a classic domination game experience and allows you to play a tournament like the game as well. A special card is revealed in the tournament type game from the territory deck. Here, the players get points for the total land mass that they own. Thanks to the open nature of the map, the situation can change at any moment. The classic mode provides a great challenge to the fans, the complex map requires you to take every step with caution and develop thoughtful strategies to face the challenges.

Apart from the basic strategy rules that many RISK games come with, this game comes with some rules custom made for this specific Game of Thrones Edition as well. In this board game installment of Game of Thrones, you earn ten victory points by completing the different task with each worth one or four points. The tasks are quite simple and contain a wide variety of objectives to keep the action fresh. Some tasks require you to collect a specific amount of gold to control different castles and ports. Here you can use both the character cards and Maester Cards. The combat mechanics are ported over from classic Risk adventures.

The diverse map makes the adventure and action quite fun and the experience does not seem repetitive and boring. The map forces you to explore the large area to complete certain tasks. The game does not contain a lot of action as most of it is aimed at exploration. You explore each area and try to get hold of all the ports. As the ports are located at the edges of land, you will be required to traverse the complete area of the map in order to reach your destination. Even without so many attacks and offensive elements, the game has a thrilling and chaotic nature. During your journeys, you will be required to attack opponents who are controlling the ports or those who come in your way.

The versatile nature of this game allows it to be played in multiple modes. The mode closest to the actual Game of Thrones experience has to be the classic version. It manages to capture the feel of the actual world of GoT. Here you control large chunks of areas and attempt to gain more land by attacking your opponents as well so that you can eventually sit on the glorious Iron Throne. In the second version, you are mostly working on completing different objectives to score some points. 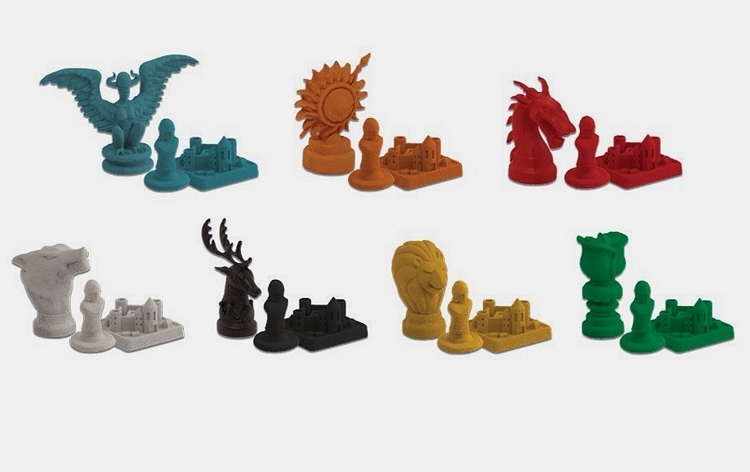 Conclusion – For the price, you are getting a fair deal with this Game of Thrones Edition board game from RISK. The map feels quite special and unique as it is made from ground up for this special edition. Each component is made with great attention to detail. Overall package feels premium and manages to capture the look and feel of the actual experience. For the price of one game board, you are getting two game boards, one for two-player multiplayer and other for a three to five player multiplayer session. The ability to combine both for an intense seven-player game is an added bonus. You are also getting around 315 army pieces, seven boards for players, 187 cards, above fifty special unit tokens, nine dice, seventy-five dragon coins and a rule book. The attention to detail with this product is amazing, each component is made with great attention to detail, and the game indeed feels special just like the series. The game has a strong story just like many other risk classics, the action segments are quite good as well. The flexible map forces you to think out of the box and come out with unique strategies to one up your opponent.

Not only this, you are essentially getting two completely different versions as well to make sure that the game does not get boring or feel repetitive at any point. Each version has its own specialties and both are quite interesting. The classic version puts more attention on exploration and capturing on land whereas the second edition requires you to complete specific tasks and collect victory points. For any Game of Throne or even just a Board Game fan, this product is a great buy that will surely keep you entertained on the weekends.