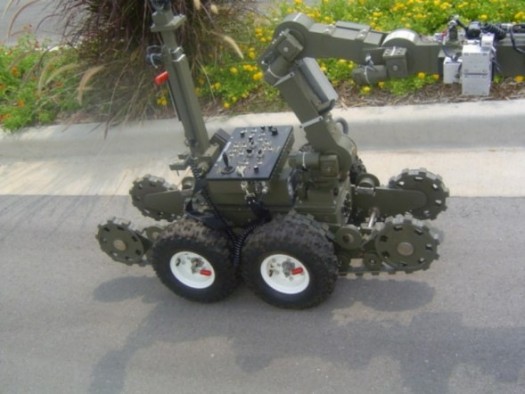 Earlier this week, a robot in Colorado successfully negotiated for the surrender of a hostage taker.  I was shocked.

Robots doing good deeds like negotiating for the safety of humans?  Unheard of, right?  Everyone knows robots are evil and only aim to enslave mankind.  Of course, this one wasn’t autonomous, so everything was controlled by his benevolent human operator.

According to reports, a heavily-armed 61 year old man barricaded himself inside his home, threatening to shoot anyone who comes in to appease him.  The local authorities’ solution?  Send in a robot.  Let’s see you gun that slab of metal down, pal.

Since a “negotiating robot” isn’t really in any known government’s arsenal yet, the team sent in a bomb disposal mechanoid, equipping it with a camera, a mic and a set of speakers.  An operator steered the machine into the armed man’s location, while police personnel monitored the audio and video feed.  When they were within talking distance, they began negotiations over the robot’s speakers.

Did they speak in a robotic voice pretending it was the robot talking?  The news didn’t say, but I sure hope they did.  I totally would if I was the negotiator. “You have to give up.  There is no escape….bzzzzzztttt.”

See, this is why robots are dangerous.  The bastards can’t die.  You can bomb them, short them or run them over with a monster truck all you want – they won’t even care.  They know a quick trip to the lab (heck, even some modder’s garage) can bring them back to life.

Zombies are nothing.  It’s the robot infestation that will really be our undoing.