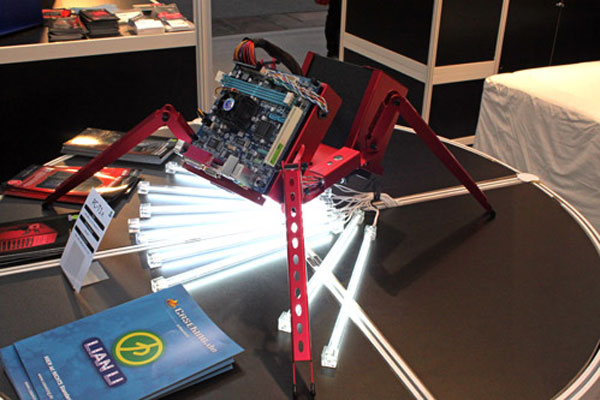 Run for your life, there’s a giant spider on the table. Oh wait! We are geeks. Change in plans, quickly put your hand near it and let it bite you – then you will turn into Spiderman. Oh wait, it’s only got four legs and it’s actually a PC case. Damn you, Lian Li, damn you.

That’s only one of the many possible fun scenarios you’ll encounter with Taiwanese company Lian Li’s PC-T1R chassis, a PC case designed to look like a giant spider on your desktop. Why would they do that? I don’t know. You have to admit, it kinda looks awesome, right? 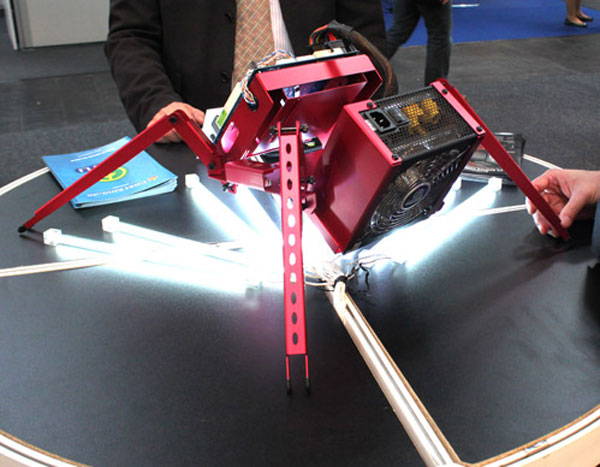 Looking more like a small form-factor robot than a computer chassis (or a spider, as Lian Li claims, for that matter), the PC-T1R is a clever little creation that showed up last week at the CeBIT trade show in Germany. We’re not sure which part’s supposed to be the head and which one’s supposed to be the rear, but they put both the compact mATX motherboard and the power supply on either end of the frame. They didn’t throw in hard drives during the exhibit, though, so I’m assuming you can put one on the body and another on a slot right under the board.

Why bother with kitschy stuff on your workdesk when your desktop PC can be a bundle of strange all on its own? That’s right, you got no excuse. Seriously, someone should mod this to make it walk – it’s gonna be awesome. Who needs a laptop when your desktop can follow you around to the local Starbucks? Just carry an LCD on your backpack and you’ll be good to go.

No planned release date yet, but pricing for the Lian Li PC-T1R is being pegged at €150 (around $205).  Yep, that’s just for the case alone (maybe with the power supply bundled – if you’re lucky).