Rock Paper Scissors Glove Pawns You At RPS Over And Over

Who needs playmates when you can play with yourself? No, not like that silly, pull your pants up! We’re talking about rolling out a competitive round of RPS with the Rock Paper Scissors Glove.

Simply start shaking your fist to start a round and throw your best move. The glove will do the same, showing a graphical image of its play (either Rock, Paper or Scissors) at the same time you pose your hand. It will determine who wins too. Don’t worry,  It plays fair.

Created by Steve Hofer, the Rock Paper Scissors Glove is a simple hand glove with a slew of electronics attached to enable the hand-to-electronic-hand showdown. Motion is detected by a triple-axis accelerometer, while two flex sensors help determine what kind of hand you threw up. It uses a layered edge lighting display with a polyester surface to show its move. Deciding on which hand to play against you is determined by an Arduino Mini Pro, which also saves previous rounds to keep tabs on your playing habits, allowing it implement a competitive attack. 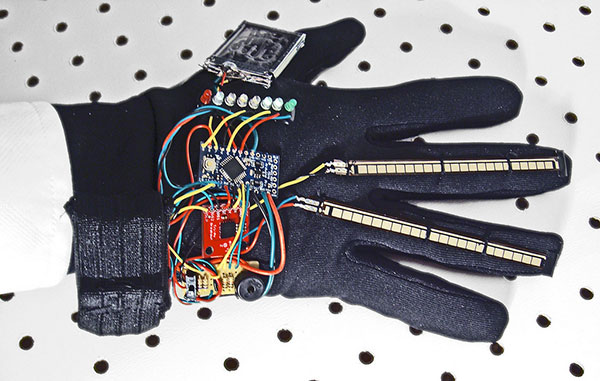 Did you read that last part? That means, you’re not only getting PWND while playing WAW on Xbox Live, you’re getting gutted to pieces when you play RPS by yourself too.  Basically, that clever Hofer is teaching you to build a computer that’s going to do nothing but beat you up in a childhood game all day, after a few days of getting to know how you like playing your hand. Just like what the damn robots are going to do when the time comes. Bastards.

Now only if some one can enhance this and come up with a system that determines and stores moves of my wife and how she is going to react when I goof up, I see an international market opening up.

Full instructions for the Rock Paper Scissors Glove are available on Steve Hofer’s website (link below).