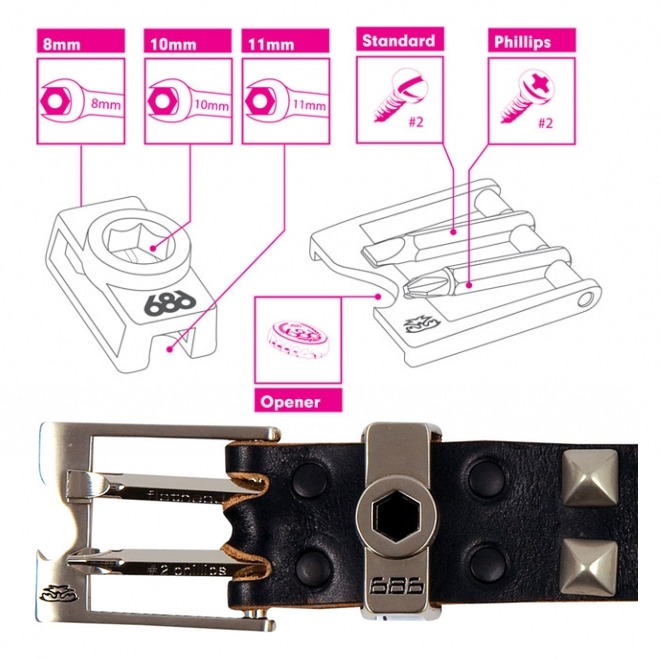 Ready to give up the Swiss Knife‘s place in your pocket, but still holding out for something to quickly help out in a screw or bolt emergency?  You might be interested in the Rocket Stud Snow Toolset, a leather belt hiding multi-tool abilities.

Developed by skate/snowboard manufacturer 686, the accessory is completely wearable.  Unless, of course, studded belts have no place among the pleated slacks and dress shirts hiding in your closet.  If that’s the case, then it’s absolutely unwearable.  Better hand it down to the younger buck in the family, old man.

The Rocker Stud Snow Toolbelt uses both the metal buckle and the bit where the belt loops (sold in brushed nickel or blackened bronze finish, by the way) as the location for the tools.   Available for use are #2 flat and Phillips screwdrivers,  three wrenches (8mm, 10mm and 11mm) and a bottle opener.  You will likely need to remove them from the belt to use, which should be easily accomplished (the end of the belt just needs to be unpinned to release both the buckle and loop).

We get the “rocker” part of the name.  The belt is studded, hence the rock-and-roll appeal.   The “snow” part, though, is a little confusing, since screwdrivers and wrenches should be usable even post-winter.  We’re guessing the “snow” reference is for the fact that it’s made from 100% full-grain waterproof leather.  You know, since snow is frozen water.  Whatever.