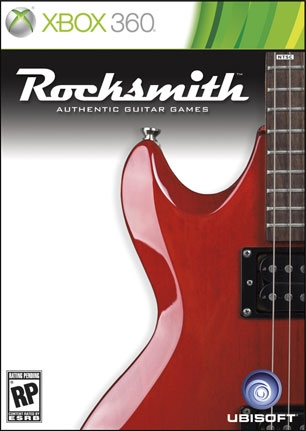 Rhythm games are dead and Guitar Hero’s demise all but made it official .  If you never warmed up to plastic instruments because…well…they’re plastic toys, then Rocksmith just might prove a little more to your liking.

Instead of using instrument-shaped controllers, as with Rock Band and Guitar Hero, you play the game with an actual electric guitar.  You don’t need to buy a game-specific one, either — you can plug in that old Strat that’s been gathering dust in mom’s attic since you graduated from high school.

Ubisoft is still keeping most of the gameplay details under wraps.  So far, though, it looks like Rocksmith will come with a USB-to-TRS connector cable, effectively turning your Xbox 360 or Playstation 3 into a makeshift amplifier for your instrument.  We’re guessing the career mode will proceed like Rock Band, except you’ll actually have to finger real notes in, instead of just punching buttons.  Which, by the way, sort of makes it the kind of game a kid will buy and play with for two months before giving up — you know, like a real guitar.

According to the official page, the game will have playing modes for players of all skill levels, allowing beginner and advanced musicians alike to jump in and be sufficiently challenged.  Oh yeah, the game will come with tons of effects (so you can shred like a real rockstar), as well as mini-games that will hone in on specific playing skills.

Rocksmith is currently “Coming Soon” according to Ubisoft.  You can whet your curiosity a bit by checking the multiple videos available from the product site.