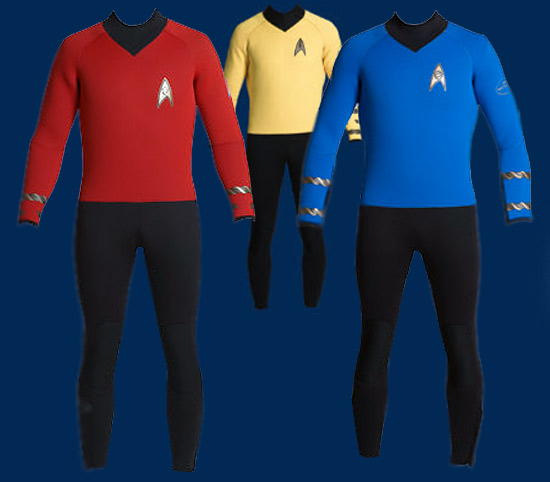 I love surfing. I just do not know how else to put it. Land locked areas scare me. My vacations are always planned around areas with not just beaches but the ones where you can actually surf. There are enough of surfing related debates out there already. We are considered no good to society beach bums. Short boarders hate long boarders. Long boarders think short boarders can go f&$# themselves. On outside it looks very cool and mellow but surfers know that its a very selfish sport also. We all want all the waves to our selves. And did I mention every one else is a kook. But nothing else just compares to the feeling of gliding over a wave.

But never have surfing been compared to geek. That is until now.

Meet the Roddenberry Star Trek wetsuit, which turns the coolest surfer dude into the dorkiest Trekkie faster than you can grow pointed ears. I can’t wait until some one tries this out at a local beach.

Styled to resemble the uniforms from the original series, the suits come with genuine colors and rank insignias as worn by the original cast.  More than just faithful reproductions for fan amusement, though, Rodenberry claims them to be top-of-the-line water gear providing “the ultimate in warmth and exposure protection.”

The Star Trek wetsuits feature an insignia on the chest, along with rank braids and an RDT shoulder logo.  There are three colors of fabric, all of which mimic the same ones on the show: Command Yellow, Science Blue and Engineering Red.  All three sound equally geeky, so choose the one that clashes worst with your skin color to achieve maximum dork factor.

You can choose among different thickness of materials (from 3mm to 7mm)  – the thicker your suit, the higher the price.  Each unit is made-to-order, tailored to an exact fit (you’ll need to provide your measurements).  Bonus points, by the way, if you’ve got a huge belly – you’ll be the king of the beach geeks in no time.

“These wetsuits are not novel gimmicks,” according to the sales page.  Sure.  Right.  A wetsuit that makes you look like a dude from Star Trek isn’t a gimmick.  Of course they are.  It doesn’t make them any less awesome, though.  Prices range from $435 to $470.

Surfers will take any innovation and research we can get in the realm of wet suits and surf boards with a smile.  I am very double minded about this one though. I say its super cool if its a hot chick wearing one of these but if its a dude, you will get your ass kicked at local break just for wearing one. What do you guys think?