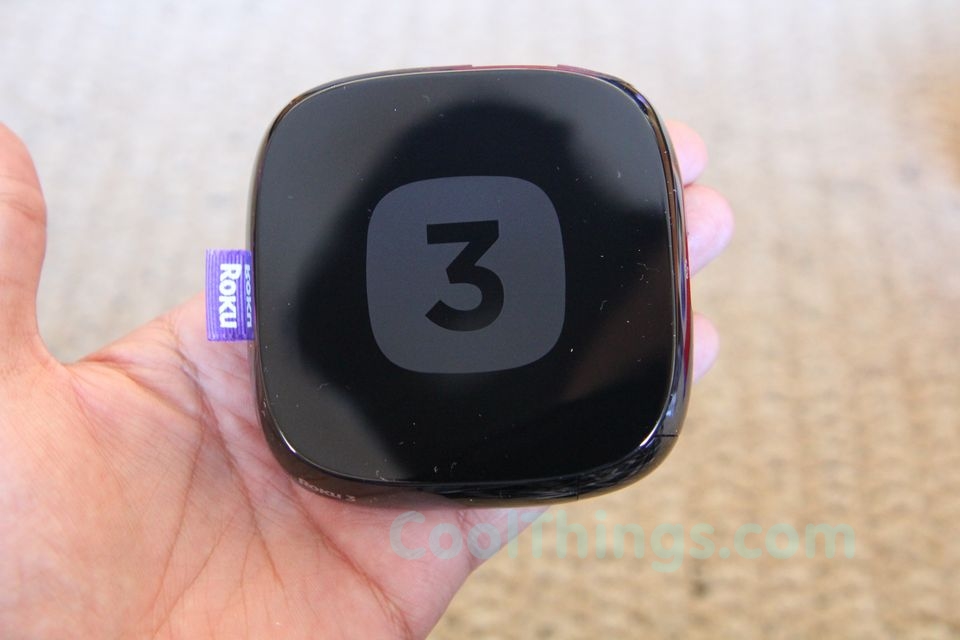 Whether we use Apple TV, a web-connected set-top box or a small HTPC, most of us already have a way to stream web content onto our televisions.  If you want the most options with the least amount of hassles, though, it’s going to be hard to top what the new Roku 3 brings to the table.

The latest in the company’s line of video streaming boxes, the new flagship is obviously aiming squarely at Apple TV.  Not only is it priced to compete with Apple’s streamer, Roku has overhauled the interface, refreshed the design and crammed in more powerful hardware, too, all while maintaining its hard-to-beat inventory of content.   And, no, the goods don’t stop there, either.

Interface: The Roku 3’s most welcome change, by far, is the interface, which uses the screen real estate a lot more efficiently than previous versions (which, let’s be honest, were quite cumbersome).   On launch, you get nine channels on the right half of the screen, which you can quickly scroll through to browse through channels with ease.  Everything, including the channel store, is now available on a persistent left-hand side menu, saving you from the hassles of previous implementations that required jumping to a separate interface.  Those who bought previous generations of Roku during the holiday sales don’t need to fret, though — the new UI is making its way via an OTA update to existing devices as well.

Design: Physically, the new box is considerably sleeker than its predecessors, with a pebble-like rounded aesthetic, arguably making it as pleasant on the eyes as every Cupertino fanboy’s beloved Apple TV.  It takes about the same dimensions as previous Rokus, but gets a little more heft (a good thing) so it can stay planted better, especially with non-skid rubber at the base. 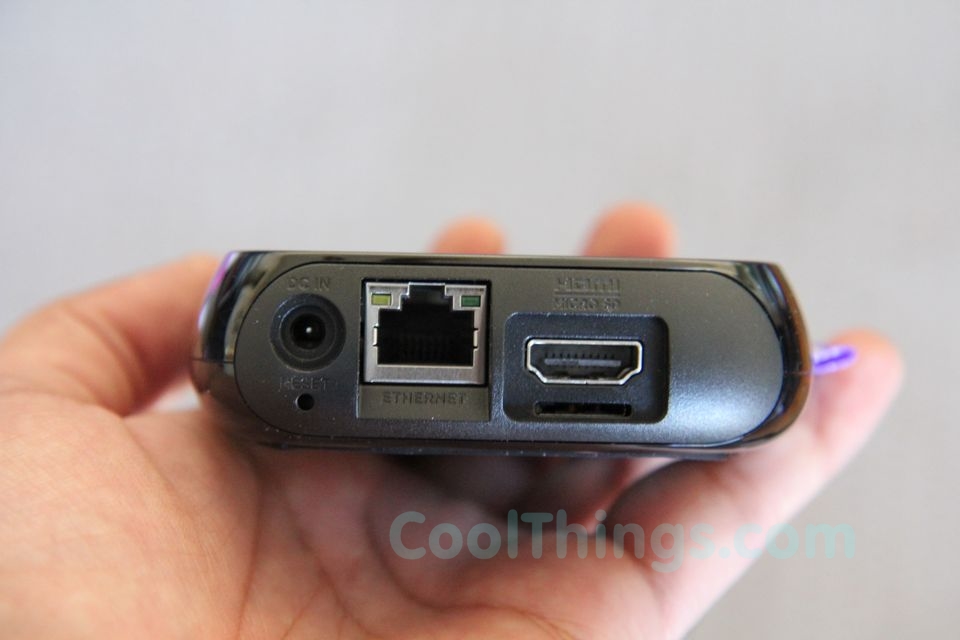 Hardware: Roku 3 boasts a faster chip powering the operation, one that boasts five times the speed compared to the last-gen Roku 2 XS, so it retains the 1080p HD support along with overall zippier operation.  It also gets injected with dual-band WiFi, allowing for faster and more reliable transmission of streaming content.  Most of the previous connectivity options remain — Ethernet, HDMI and microSD — although they did leave out something I wish didn’t have to go: the standard-def AV output from previous Roku versions.

Power consumption is impressive, as well.  Roku claims it streams movies while eating up just as much energy as a nightlight (which reminds me, Gummi Bear Nighlights, anyone?), so you can keep it perpetually turned on without racking up serious utility charges.

Remote: The new remote actually feels a lot like the one that comes with the Streaming Stick and uses Wi-Fi Direct to communicate with the box, allowing you to switch channels without pointing the clicker at the device.  Battery life is consistent with previous Roku remotes, since a Wi-Fi Direct connection isn’t really that much more power hungry than Bluetooth. 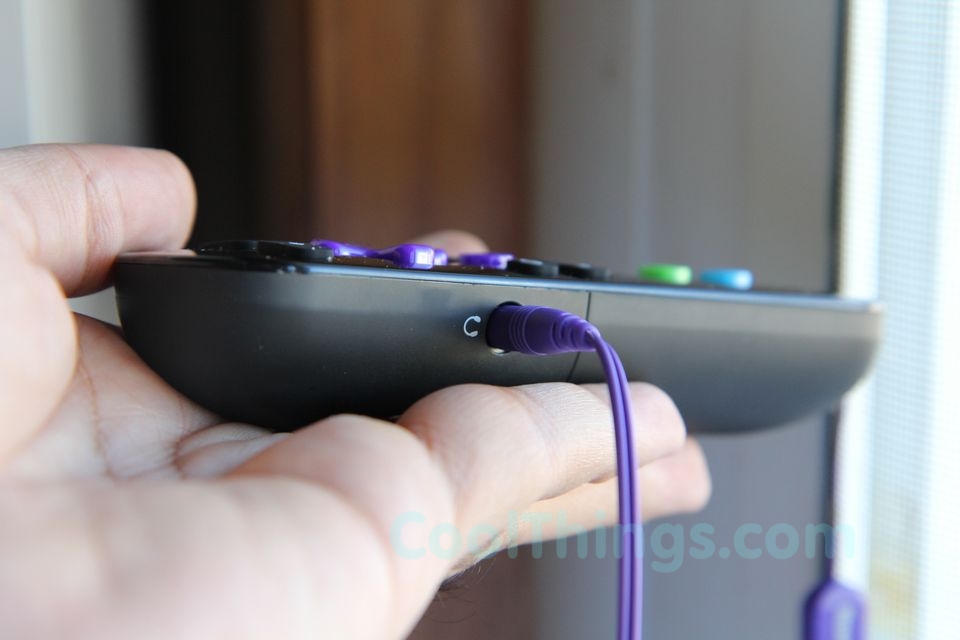 Most of what the remote does remains the same with the exception of one important feature: it now integrates a private-listening mode.  In this implementation, Roku included a 3.5mm jack right on the remote, where you can plug in your headphones to catch up on the new season of Justified at 2AM without rousing up the wife and the kids (or, if you’re single, watch loud dirty movies without embarassing yourself with the neighbors).   Once a headphone is plugged in, the TV automatically goes on mute — a simple, but definitely much-needed, feature.  The headphone volume is separate from the TV volume, too, so the TV doesn’t blast into a deafening roar as soon as you take it off mute.  And, yes, they’re throwing in a pair of earbuds along with each box.

Content: Roku already has the most extensive lineup of channels among video streaming boxes in the market (750+ and growing), with HBO Go, Amazon Prime, Hulu Plus and more.  The remaining stinker?  It still doesn’t have a YouTube channel, which may or may not be an issue to you (I consider it a big deal), depending on how frequently you rely on Google’s video service to get your fix of cute cats, how-to make up tutorials, and VEVO-censored rap music videos.

Unlike many boxes, the Roku 3 also plays games and actually comes with Angry Birds in Space preloaded.  I did try the game, which uses the remote as a motion-sensing controller, and I’ve concluded that I really don’t enjoy casual games.  Sorry, but your mileage may vary.

Of course, the box will also work with the Roku app on iOS and Android, which lets you use the mobile device as an alternate remote.  You still can’t mirror videos directly from mobile to the TV, though, but photos and music should work fine.  If you’d rather play content from your networked-connected storage devices, Roku also offers a native Plex app, which should let you plow through all your saved media (except 3D content from what we’ve seen) without a problem.

Overall: Video streaming devices are still a developing product segment.  There’s no clear-cut user experience that people demand, so we’re more likely to see products evolve until somebody hits the sweet spot.  For now, though, it’s hard to argue against the Roku 3 as the best set-up in the market.  With its rich inventory of content, motion gaming integration, revamped UI, unique features, and $99 price point, it’s the overwhelmingly obvious pick for anyone looking to drop cash on a web-connected TV box today.