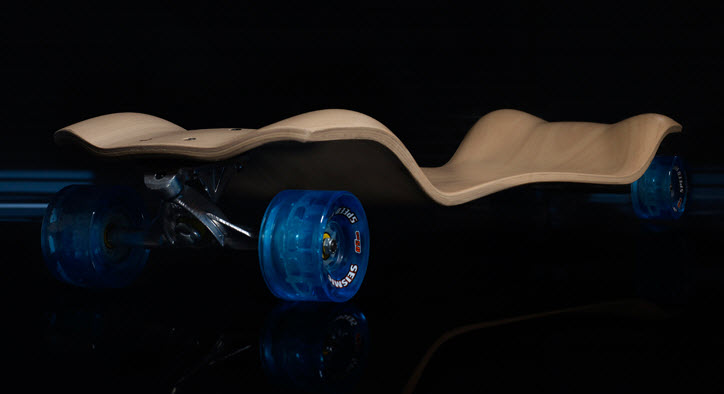 The carbon fiber Rolls Rolls Sporter has held the long distance skateboarding record for the last seven years.  This year, they took the same high-performance design into new boards called Woody, which trade the carbon-fiber platforms for stylish decks carved out of wood.

A recipient of 2010’s Red Dot Award for product design, the foot-propelled board curves in unusual ways, resulting in an odd shape that drastically lowers its center of gravity.  Aside from improving speed, the low profile minimizes the knee-bending required for riders, resulting in better riding comfort for long distance skaters. 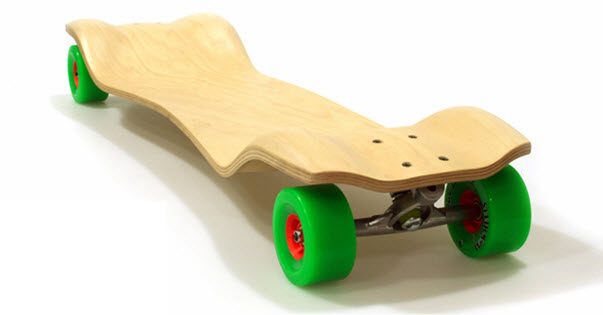 According to the creators, wood carries a few notable advantages over carbon fiber as material.  First, they flex.  Second, the plywood delivers a cushioning effect, making street surfing feel like “riding in a cushion of air.”  Each board is handmade,  guaranteeing higher manufacturing standards than a regular assembly line varieties.

Designed for serious distance skaters who want to maximize speed and comfort, the Rolls Rolls Woody 97 is available for 259 Euros, with the Woody 85 priced at 243 Euros (both before taxes).  They can also be ordered with custom wood material, but you’ll have to get in touch with them to make arrangements.