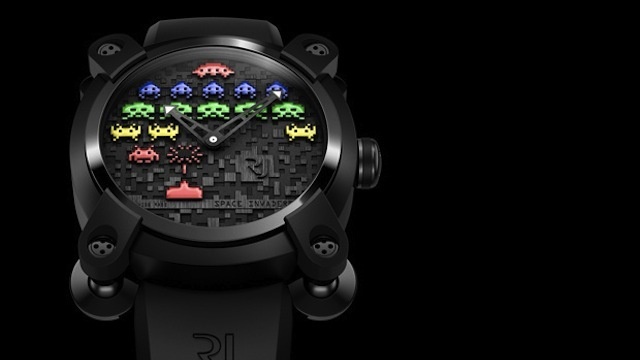 At this day and age when every gadget you own can tell time, I can’t believe we’re still wearing wristwatches.  And I can’t believe I still want to own something like this Romain Jerome Space Invaders timepiece.

Created by the fancy Swiss watchmaker in cooperation with Taito, this is easily the classiest Space Invaders merchandise I’ve ever seen.  It’s an analog timepiece (Swiss Romain Jerome caliber RJ001-A movement), though, so while you get a cool shot of enemy aliens in battle on the dial, it actually isn’t playable. 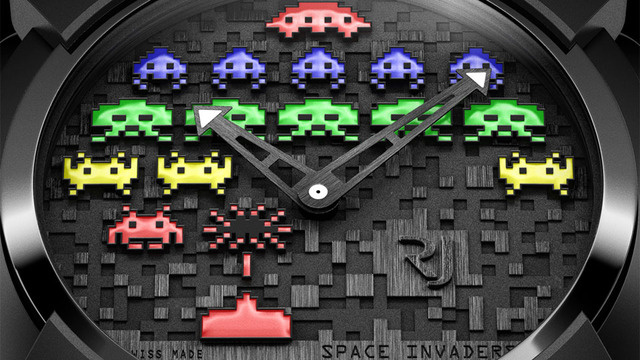 The Romain Jerome Space Invaders watch features a cambered case (made from 46mm PVD stainless steel mixed with actual fragments from the Apollo 11 capsule) that’s round on top and square in the rear.   Designed to look like a space vessel, the case comes with four ball-and-socket joints that hold the included rubber straps, cut to resemble the pivoting feet of lunar landing modules.   The back of the watch sports a special plate cut out of Moon SilverRJ, a metal alloy fashioned out of silver and moon dust.

The two-handed watch face, of course, features a graphics scene from the game, which I wish actually moved (even left to right and back would have been glorious).    It comes in two designs: colored (pictured above) and black-and-white (the Space Invaders are white, but will glow in the dark).

Fashioned as a limited edition piece, only 78 of the Romain Jerome Space Invaders watches will be made.  No pricing yet, but expect it to be more expensive than any other Space Invader merchandise you own.