Someone Wants To Build A Rooftop Velodrome And We Love It 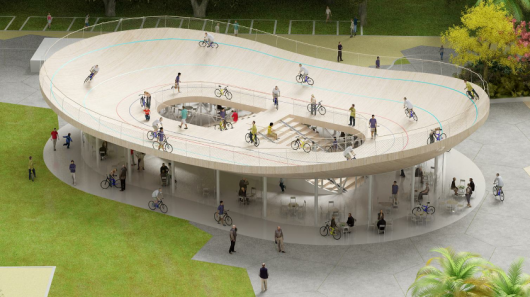 I have a bunch of friends who literally go over the top spending on accessories and parts for their bicycles.  When people are that dedicated about their pedal-powered rides, they deserve an equally dedicated bike club.  This proposed Bicycle Club with Rooftop Velodrome accomplishes that exorbitant standard.

Designed by NL Architects for a resort under development out in Southern China, the proposed installation brings a different take on the banked oval bike tack.  Instead of setting one up under the roof, they put the entire thing over it, creating both a spectacular-looking facility and a place to ride your bikes while enjoying a platform view. 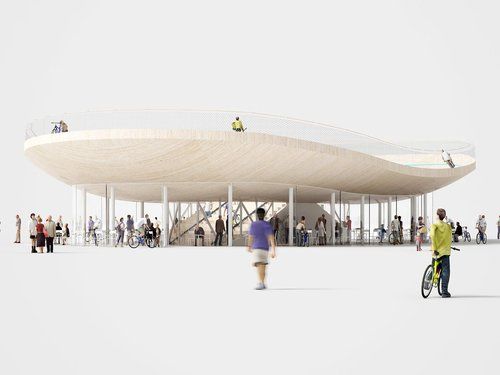 The lower part of the building is supposed to house a bicycle rental shop and a café, with the velodrome sitting right over them.  The idea is to build a self-contained facility where people can rent a bike and ride it without ever leaving the confined space.  The oval-shaped velodrome roof features a hole in the middle that leads to a flight of stairs below.  To ensure safety, both the outer and inner edges are fenced.

Of course, this isn’t the first time we’ve seen a design like this.  Remember the Autopia Europia in Turkey?  Yep, the giant car dealership with a functional race track on the roof.  The concept is similar, so this isn’t exactly a novel idea, but it remains every bit as awesome.

No word on whether this Bicycle Club with Rooftop Velodrome will actually be commissioned, but I’ll surely have it in mind if ever my rap career takes off and I start making that Rick Ross paper.  Except I’ll probably scrap the café and just put a strip club down there.  Yeah… a strip club next to a bike shop under a velodrome — now that’s living.