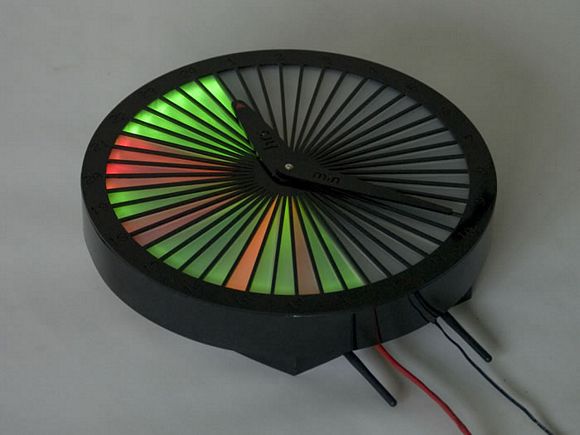 The Route O’ Clock looks so interesting it might as well serve as a fancy decorative home lighting fixture. However, the colorful face actually brings a little more talent to the table, serving as a fully-functional router that monitors and displays the strength of your broadband signal.

On the obvious level, the device is a two-handed analog clock that shows the hours and minutes just as ably as any wall-mounted timepiece you’re probably using. It displays time on 24-hour cycles, with the hour labels illuminated with LED lights on the outer panel (though the hour lighting is turned off in the photo).

Apart from the time-telling capabilities, though, it’s also intended for use as a wireless router, with a nifty way of visually showing the varying speed levels of your bandwidth connection throughout the day. The clock face is divided into 48 segments, each representing thirty minute intervals.

At any time of the day, the corresponding time segment lights up to indicate the current bandwidth strength right at that moment. Each color represents a particular signal level (though the designers don’t exactly reveal the definitions yet). More likely, the brighter the green, the stronger the signal and the brighter the red, the worse off it is. The average bandwidth signal after each 30-minute segment has passed is displayed for that area until the turn of the day.

The Route O’ Clock offers an entirely unique way of seeing your broadband strength at various times, allowing you to plan out your internet use based on day-to-day signal experiences. While it’s currently still in prototype form, I can’t imagine this not making it to market anytime soon. It’s just the coolest-looking router I’ve ever seen.