Alcohol normally decreases sexual abilities. While that may be true, alcohol laced with a variety of your friendly neighborhood herbal viagra alternatives will likely work the other way around.  That’s exactly what they’re hoping to accomplish with the Royal Virility Performance.

Created by BrewDog, this is a limited edition beer made to commemorate the upcoming nuptials between that British prince and that commoner woman.  Actually, the beer is meant to spoof all the other brewers trying to take advantage of the event by offering special royal wedding brewskies.  Somehow, though, we feel this novelty release will be much more suited for the occasion (at least, for the events that transpire after the ceremony). 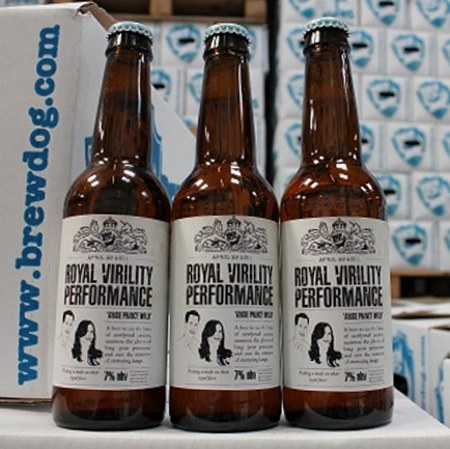 Each bottle contains 330ml of the special brew, which was formulated at BrewDog’s own facility in Fraserburgh.  Three bottles of the stuff is supposed to get your pelvis region racing like you just popped one blue pill, although I ‘ve heard claims like that before from scam advertisements that pop up on my screen while I’m at work.  At least, though, you’ll get drunk from this thing if the boner ingredients don’t kick in — not a total loss.

Only 1,000 bottles of the Royal Virility Performance beer will be sold, with shipments slated for April 28 (one day before the royal wedding).  Price is £10 per bottle.