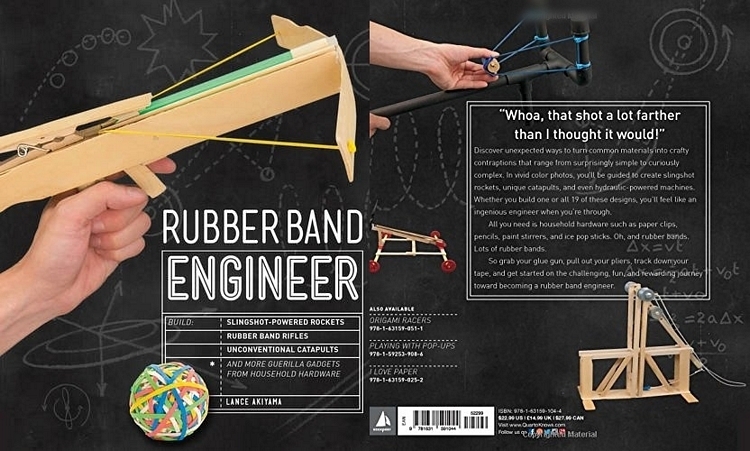 Yes, it’s nice to have a cache of weapons at your disposal when the apocalypse descends upon our way. Eventually, though, bullets run out, melee weapons wear out, and you’ll end up needing to build new weapons to bridge the gap. That’s when a book like the Rubber Band Engineer might come in handy. Well, that and a whole lot of other non-apocalyptic scenarios.

Written by Lance Akiyama, the book is a DIY guide to building impressively powerful weapons using erstwhile easily accessible materials. No need for machining tools and other complicated workshop gear here, as he uses nothing more than pencils, ice pop sticks, plumbing pipes, dowels and other items you can find at most local stores. Oh yeah, also rubber bands. Lots and lots of the springy, elastic stuff.

To the unfamiliar, Akiyama is an avid tinkerer who has parlayed his passion into a position at Galileo Learning, where he develops the hands-on science curriculum for the innovation-focused summer camp’s students. Aside from the Rubber Band Engineer, he has also written a second book, this time focused on everyone’s favorite adhesive binding material, called the Duct Tape Engineer. 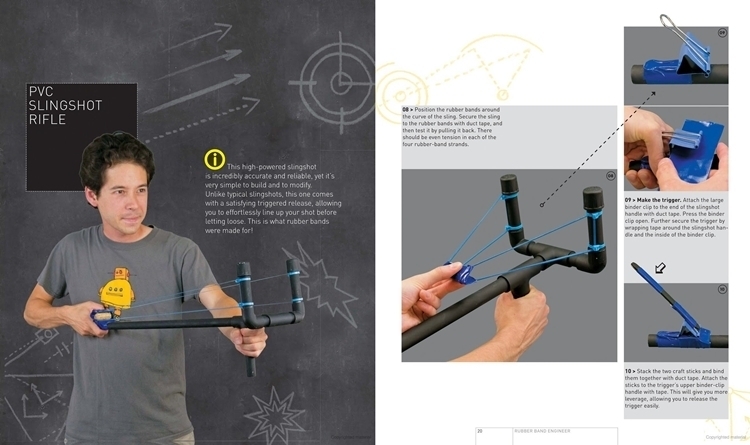 Rubber Band Engineer is a straightforward how-to book, so don’t expect to sit back and enjoy a read. Instead, this is a guide for people who want to build things using erstwhile common items, so it should serve as a handy reference while you work on whichever project you decide to do next.

With 19 projects spread out over 144 pages, the book should make for an entertaining reference for old and young tinkerers alike who’d want to spend a weekend or some spare time during the weekdays putting together some fascinating contraptions. It offers step-by-step instructions for each one, complete with a boatload of photos, ensuring you won’t be left having to piece together a confusing puzzle while building any one of the included projects.

Of course, you’re not going to buy a how-to book if you’re not sure about the kind of projects included in its pages. As such, we’re listing down every single one of the 19 projects covered by the Rubber Band Engineer to give you a clearer idea:

A couple of the projects have been posted online as sample materials for the book. If you’re curious about the quality of the objects you’ll actually end up building as part of the collection, they should make for an excellent starting point. Maybe do them first and decide to buy the book if you end up finding them enjoyable to pursue. 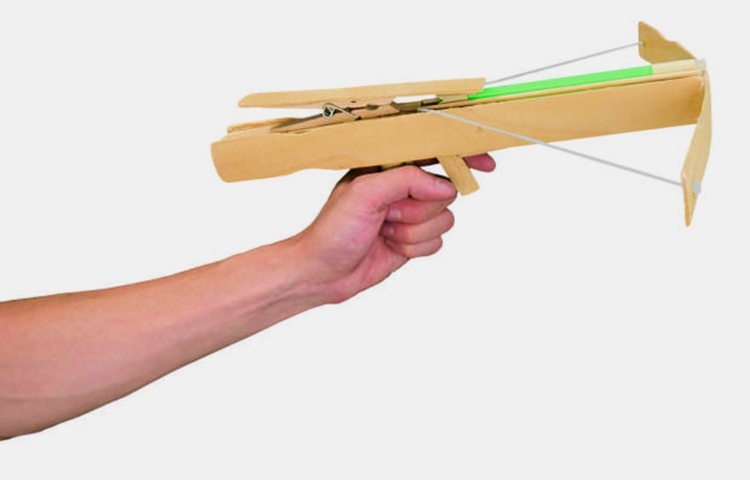 A mid-level difficulty project, this one will have you building a legit one-handed crossbow that relies on a rubber band (or a piece of string) as its launching material. It’s perfect for folks who want to shoot projectiles at zombie targets in the backyard, whether you’re arming it with actual arrows, pencils, or the book’s recommended drinking straw bolts. And, yes, it’s quite powerful with a shooting distance of over 100 feet.

This project uses six paint stirrers for the main body of the crossbow, skewers for various smaller parts, triggering mechanism, hot glue for cobbling them all together, and rubber band (or string) for the bow. The laborious part here is getting the paint stirrers into the desired shapes, which would require a good amount of sawing, carving, and drilling on your part. Since paint stirrers are, typically, very thin pieces of wood, you should be able to get away with using nothing but a sharp utility knife to cut up everything as needed, although we’d probably prefer more specialized tools (at the least, a versatile multi-tool) to make the job just a little easier.

Do note, the one made in the book is around a foot long. If that’s too small to your liking, you can scale the design by using longer pieces of wood instead of the recommended paint stirrers. 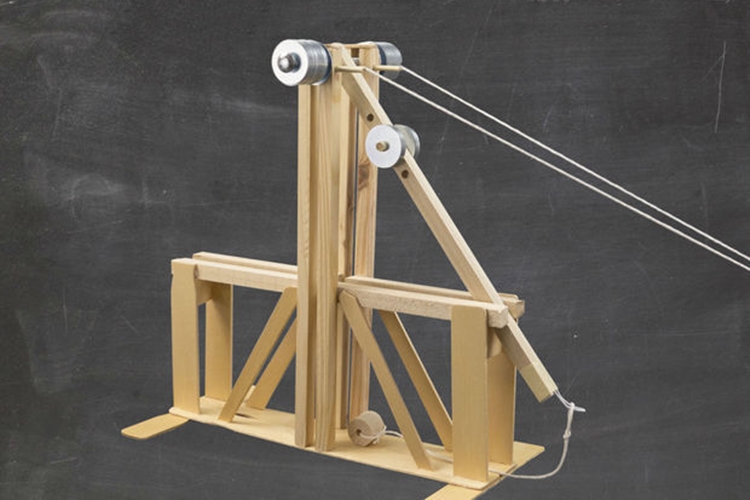 For fans of medieval-era siege warfare, Rubber Band Engineer includes numerous projects that recreate the period’s war machines in miniature form, allowing you build functional weapons for your medieval-themed tabletop diorama if you into that. Otherwise, those same things should make for excellent office weapons in place of Nerf blasters and USB-powered cannons.

This particular project uses a lot more parts than the crossbow, including paint stirrers, dowels, bolts, fender washers, hex nuts, skewers, hot glue, masking tape, and paperclips on top of the rubber bands. As with the other project, a piece of string can be used in place of the rubber band, which kind of makes the book’s title a little misleading, since the elastic things aren’t exactly essential for the builds.

ALL THE MATERIALS YOU’LL NEED FOR THE BOOK

While the Amazon page for the book says the project requires nothing more than simple household items, the samples above do make it clear that the reality is not quite that straightforward. Do note, every single part you’ll need can be easily retrieved with a quick trip to the local hardware store, so you should have no problem cobbling everything together.

If you’re curious, Lance Akayama posted all the materials required to do every single project in the book on a page in his website, which you can use as a one-stop reference, in case you want to grab everything in a single trip. These materials include various woodcrafting supplies (sticks, cubes, dowels, and more), prefab plastic parts (wheels, propellers, syringes, and more), office supplies (clips, bands, ties, and wires), PVC pipes, various adhesives, electronics (LED light, handheld fans, and coin batteries), and a whole lot of tools.

You can get the book, Rubber Band Engineer: Build Slingshot Powered Rockets, Rubber Band Rifles, Unconventional Catapults, and More Guerrilla Gadgets, from Amazon, where it’s priced at $16 for paperback and $11.99 for the Kindle version.