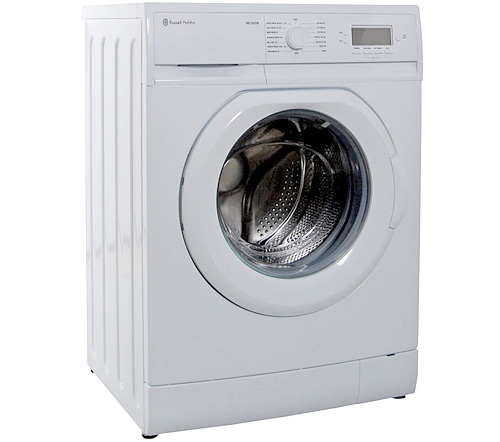 Washing clothes is a chore we could all do less of.  And the new Rusell Hobbs RH1248TW washing machine just cut down the amount of time you have to sit through it.

Forget waiting an  hour and a half for a wash cycle to finish — this heavy duty washer will dutifully clean your moderately-soiled garments in only 12 minutes.  According to the company, it will banish an average of two years and four months’ worth of washing activities from your lifetime, which you can now reclaim to do great things in humanity’s service (like earn more Xbox Live achievement points or something).

The Russell Hobbs RH1248TW accomplishes the time savings using a  twin jet system that injects  detergent and water onto the laundry using a pair of nozzles (instead of one, like other machines).  Yep, that small tweak apparently allows that serious shave-down in time, although the 12-minute cycle (called “Rapid Mode”) is only good for moderately-soiled clothes.  The grease-covered jeans, the mud-caked jackets and the super-stinky shirts that sit in your bin will need to be put through the washer’s less-rapid cleaning modes.

Other features include extra spinning and rinsing programs, variable temperature, spin speeds, a delay start function and a half load detection system (which automatically cuts washing time to compensate).  By the way, using the Rapid Mode will save on both energy usage (30 percent) and water consumption (15 percent), making it a more financially-rewarding appliance, too.

Available in white and graphite finishes, the Russell Hobbs RH1248TW is offered in 7-kg and 9-kg models, with prices starting at around $400.