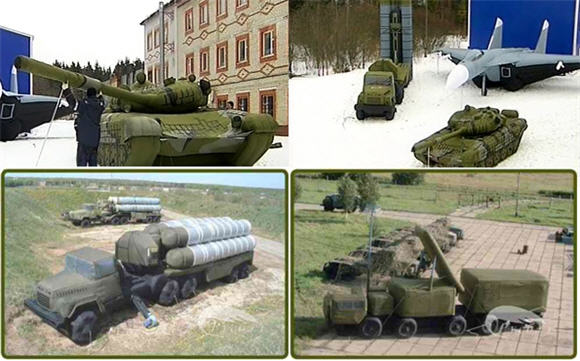 Want to put together your own fake army to fool all the dolts trolling Google Earth?  Try getting in touch with Rusbal, a Moscow-based R&D company that produces inflatable, life-size replica of the usual implements of war, including big ass tanks, bomber jets and rocket launchers.

Used by the Russian Army to fool spy satellites taking aerial pictures of local areas, the blow-up contraptions are reportedly more realistic than older generations of dummy weapons, which were made from either rubber, plastic or plywood.   Not only that, they irradiate warmth too (so heat-sensing drones should be easily fooled), along with radar and infra-red bands (just in case the enemy uses more tools than Google Earth, which they probably do).

In actual battle scenarios, fake military artillery serves to distract enemies, forcing them to use their available resources keeping tabs on dummy installations, instead of focusing on real combat units.    According to reports, the army even sends in soldiers who pretend to operate and maintain the balloon equipment, so it looks like a real threat waiting in the wings (no, they don’t create mannequin soldiers – too obvious).

But why blow-up balloons?  They are lighter and more portable than other types of dummies, allowing the army to set up a fake camp within minutes (the fake missile launcher reportedly pumps up to full size in five minutes, the sham battle tank in four).  Just like you can in your backyard.  Can you imagine the shitstorm (along with the giggles) you can cause putting up fake tanks, battalion trucks and cannons right on your school’s playground?  Way-freaking-awesome.