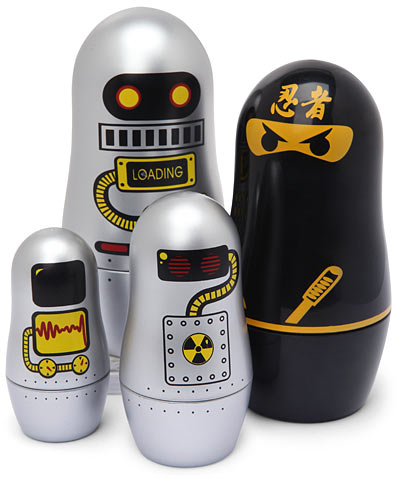 How do you make Matryoshka dolls cool again? Dress them up for the modern age, of course, just like they did with these Robot and Ninja Russian Nesting Dolls.

If you’re not familiar with Matryoshka dolls, they’re basically a set of hollow dolls of decreasing sizes, placed inside each other. That means opening up one doll gets you a smaller doll, which, in turn, contains another doll and so on. 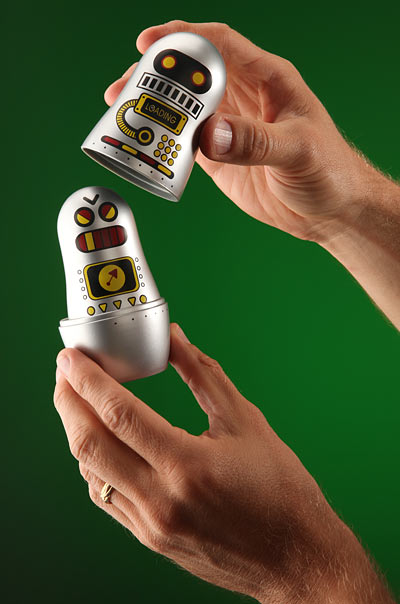 Every set of Ninja and Robot Nesting Dolls contains six dolls each, ranging in height from 30mm (slightly over an inch) to 114mm (about 4.5 inches). Unlike your grandma’s wooden babushkas, these modern interpretations are built out of hard ABS plastic and finished to a glossy shine. Each of the six dolls feature a slightly varying design from the rest of their crew, just like the classic Matryoshkas of old.

I remember seeing a few Matryoshkas in our attic when I was little and the things scared the crap out of me. Those dolls with painted faces were downright creepy. Fortunately, none of that horror movie vibe makes its way here, with the dolls emanating more of a campy sci-fi B-movie feel. Just our kind of thing.

According to Thinkgeek, the Robot Nesting Dolls have been tested to conform with the Three Laws of Robotics, so you can quit worrying about their potential role in the impending robot takeover. The Ninja Nesting Dolls aren’t vouched for, however. Well, you know them ninjas – they’re sneaky. Both are available for $13.99 a set.