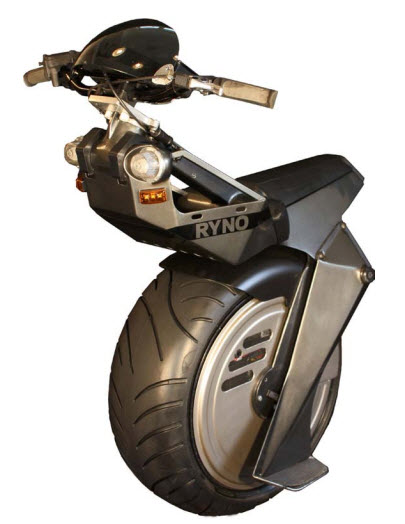 Based on how many unicycle designs we’ve seen since last year, it’s fair to say that the motorized single-wheeler just might really have a relevant place in our future.  Ryno Motors’ Prototype II is the latest of the bunch and, to its credit, looks decidedly less circus-inspired than other unicycles currently searching for funding.

Designed for short-range transport (similar to a Segway), the single-seat vehicle is electric-powered, with a small onboard battery feeding it juice for up to 30 miles on a 1.5-hour charge.  Like we said, it features notably more aggressive styling, making it perfect for biker clowns and men who can’t bear the idea of driving around on a vehicle that’s less manly than Malibu Barbie’s Mustang.

Ryno Motors doesn’t even have an official name for the bike yet (it’s just Prototype II), so you can imagine just how far away this is from even nearing production.  Of all the unicycles we’ve seen, though, this appears to be one of the more serviceable designs, with its motorcycle-style looks, ultra-compact frame and decent specs.

No word on what motor it’s using, but Ryno claims it can hit a top speed of 25 mph, apart from making it up 30-degree inclines.  It weighs a light 125lbs, has a turning radius of 0 to 3 feet and a maximum load of 250lbs.  Like other motorized unicycle prototypes, it uses a self-adjusting mechanism that prevents the rider from executing moves that can compromise its balance.

According to Ryno, riding controls are similar to motorcycles, eliminating the learning curve for anyone who can ride a motorized bike.  The company is currently seeking investors.  You can check out more details from their website.