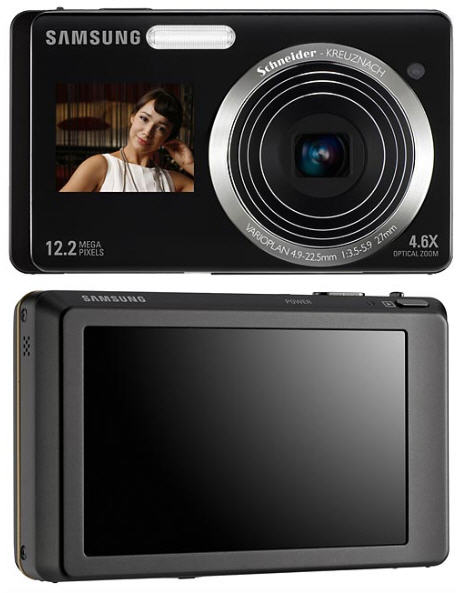 Like to take self-portraits on your digicam?  You probably know all too well about how disastrous those types of photos usually end up, with good shots often a function of sheer luck than anything else.  Save yourself the hassle and arm yourself with Samsung’s new dual-screen point-and-shoots, which fit in a second display right next to the lens.

Billed as the Samsung ST500 and the Samsung ST550, both models are virtually identical, with only screen size separating one from the other.  While both cameras tout similar one-inch touch-capable LCDs on the front panel, they feature 3- and 3.5-inch touchscreen displays with haptic feedback around the rear, respectively.

Details of both compacts include 12 megapixel sensors,  4.6x optical zoom (wide angle 27mm Schneider Kreuznach lens), dual image stabilization (both mechanical and digital) and an HDMI out.  Like all good point-and-shoots, it comes with a 720p-capable camcorder feature that manages to grab videos at 30 fps.

Apart from being able to see yourself during portrait shots, the device offer other novel ways to address some common problems with point-and-shoot cameras.  Self-portrait shooters, for instance, can simply tap on the small display when they want the to trip the shutter, making the whole process considerably easier.  Additionally, it comes equipped with Smile Shot, so it can automatically take snaps as soon as it detects teeth (make sure you put your dentures on).  Samsung is pegging the camera to be perfect for taking close-up shots of kids too, as it can show funny animations on the small display to keep their eyes in your direction when you take the shot.

Ready to grab the best-looking self-shots for your Facebook profile?  The dual-display Samsung ST500 and Samsung ST550 will be hitting the streets come September.