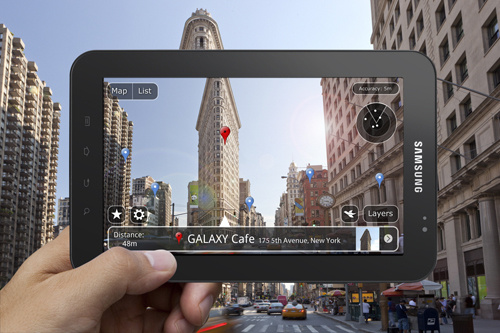 Samsung has finally made a formal announcement on their poorly-kept secret of a slate.  Called the Samsung Galaxy Tab, the much-awaited device will run Android 2.2 Froyo and own the distinction of being the first DivX-certified tablet.

With the DivX certification, Samsung is obviously positioning this as a capable multimedia device for mobile users.  Unfortunately, it won’t be able to display full 720p video, with screen resolution topping at 1,024 x 600 pixels (HD content will be played, but output will be downgraded). Aside from DivX, it also offers support for XviD, MPEG4, H.263, H.264 and other formats. 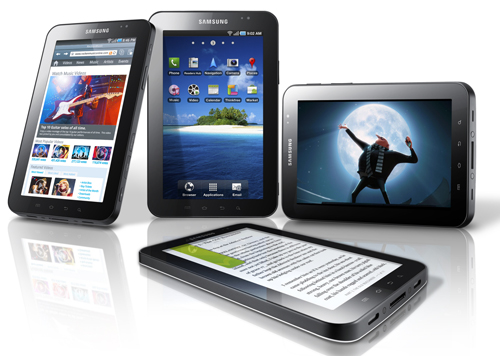 Details of the Samsung Galaxy Tab include a 7-inch capacitive touchscreen, a rear-facing 3.0 megapixel camera with autofocus and LED flash, a forward-facing 1.3 megapixel camera for video calling, 3G, WiFi, Bluetooth 3.0, a bevy of onboard sensors (gyroscope, geo-magnetic sensor, accelerometer and light sensor), choice of onboard storage (16GB or 32GB) and microSD card expansion up to 32GB.  Core hardware consists of a 1GHz Cortex A8 processor, a PowerVR SGX540 GPU, 512MB of RAM and a battery that can sustain 7 hours of movie playback on a single charge.  It has a 30-pin connector, similar to the iPad.

While it falls right in the tablet category, it will support phone functions, including SMS, MMS and voice calls.  Because it runs Android 2.2, it comes with Adobe Flash Player 10.1, as well, affording you access to all manners of web content.  It’s preloaded with Google’s usual suite of apps, Samsung’s dedicated services (Readers Hub, Media Hub, Music Hub and Social Hub) and a number of free applications (Thinkfree Office, Layar).

The Samsung Galaxy Tab will launch in Europe beginning mid-September, with other markets following shortly after.