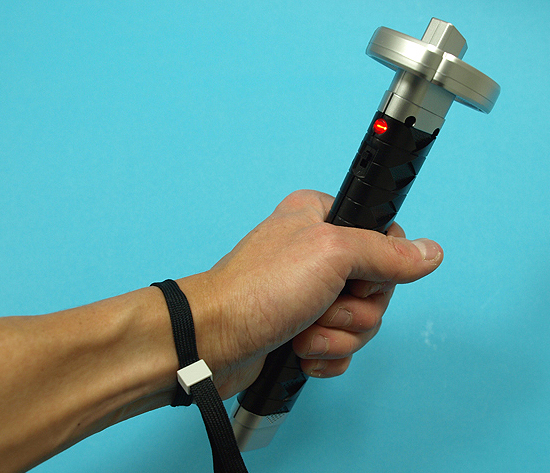 Ever used the Lightsaber app on the iPhone?  I know, it’s stupid (but hella fun).   The Samurai Air Sword does the same thing, performing sound effects every time you swing the hilt (and it’s really just a hilt).  You’ll have to imagine the invisible blade slicing through your opponents (yep, that invisible dragon), of course, before ending their life by thrusting it into their heart.  Haiii.

Who says only air musicians get to have invisible fun?  Swashbuckling wannabe-samurai warriors like you deserve love too.  And this “all bark, no bite” sword can now be your weapon of choice.

The Samurai Air Sword is actually just a sword handle with a design that stays close to the familiar bladed implements used by them noble Japanese warriors.  Equipped with a gyroscope inside, it can detect a bevy of movements, playing one of 48 swooshing, swiping and thrusting sound effects to accompany your attacks.  Based on what I can discern from the Japanese site, each type of onslaught creates its own sound, with special ones piping up when you perform combos.  Sounds wicked.

For those dissatisfied with using invisible sharp objects, the hilt does seem like it can be modded to hold a light blade (or a wooden one, if you’re just into more pretend play).   Now, imagine how much fun that will be when a burglar breaks into your house.  You start brandishing the sword, the culprit sees the blade and it makes all that awesome sound – I’ll be jumping out the window if I saw you.

Want to put some much-needed panache to your pretend swordfights?  The  Samurai Air Sword is only $18.  Buy ten and arm your entire family of warriors.