Sasan Magic Carpet Is A Sleeping Mat With Special Talents

If you have the gall to call your creation a “magic carpet,” it better be able to fly.  While the Sasan Magic Carpet doesn’t quite go that route, its clever folding design gives it a whole lot of versatility as a surface for chilling out on.

Created by Alexander Munk Design Bureau, it’s actually more of a sleeping mat than an actual rug like the Duddha.  Instead of just a thick slosh of fabric, it’s actually made up of stiff padded panels (about the same thickness as carpets) that allow for a whole host of configurations. 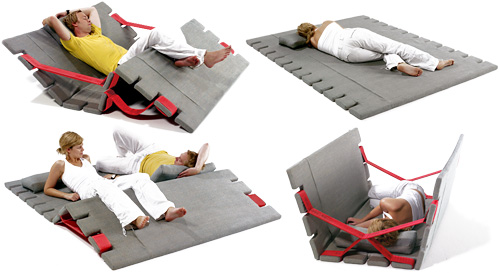 The Sasan Magic Carpet uses four separate panels that allow it to fold into a variety of angles, giving the erstwhile flat surface whole new fittings, such as a backrest, an elevated leg rest and even walls for privacy.  Reshaping the mat is done through a combination of slits built into the sides and straps that you can hook onto them.

Because of the versatile styling, the mat can be configured as a sleeping surface, a comfy lounger and even a weird adult crib.  An outdoor version of this thing will probably make for a perfect sleeping mat/lounge chair for camping, although the stiff panels do make it a bit of a space hog.

Turns out it’s been a while since the Sasan Magic Carpet was designed.  Given that I haven’t seen anything like this in stores, we’re guessing it didn’t exactly catch on with potential manufacturers.  That’s too bad since I’d rather keep something this around as an emergency sleeping bunk, instead of a spare mattress.