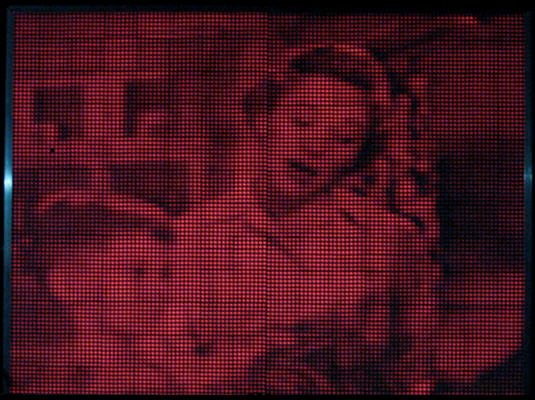 The SatanVision is supposed to represent how televisions will look like in hell.  Barring that the fiery furnace exists, it should play nice with its closest earthly relative, too – the annual Burning Man festival, for which the apparatus was made.

Lo-fi and painfully red, the display hardware was created by DIY enthusiast David Forbes, who spent months of his life and $1000’s of his own cash to make the crappiest TV ever.  Well, nobody said he was smart, so there’s your excuse.

Posting a ridiculously bad 128 x 96 resolution (I think that’s worse than the LCD of every cell phone in the market today), the SatanVision is arguably the crummiest TV in the world.  The enhanced resolution reduction is intentional, though, to force the super-smeary video effect.  Other shitty features include extra-dim quality (making it impossible to watch during daylight), non-uniform display (for more difficult viewing) and one intentional bum pixel (just to wrap it all up). 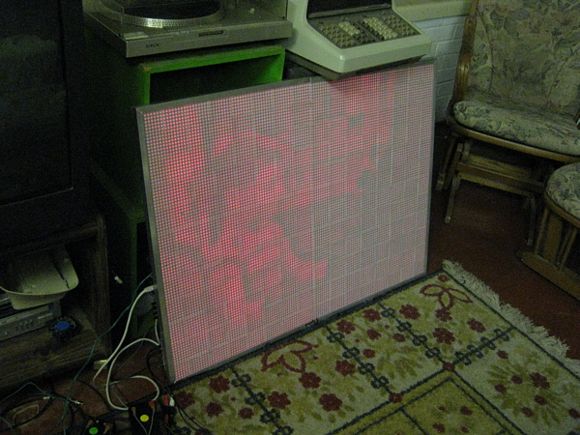 The TV was built using an array of 8 x 8 low-wattage red LEDs, with a custom-made digital circuit board that takes in regular NTSC input and displays it as the aberration in the photos.  It comes with real knobs for width, brightness and other settings, along with an original 1976 GI AY-3-8500-1 Pong chip, so you can play the timeless classic all day.  Eternity to kill and only Pong to play with?  This really is the TV from hell.

The sinners among you can get the skinny on how to build your own SatanVision directly from David’s site.  He posts the full set of schematics, instructions, PCB design and other components needed to make your own.  You did know you’ll have to make your own display panel when you come to hell, right?