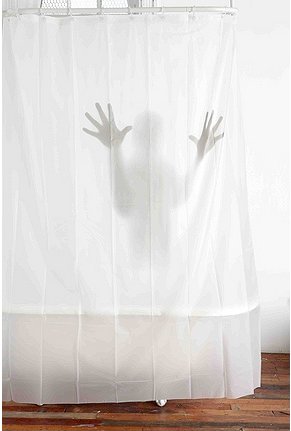 Want to creep out guests who ask to use your bathroom? Regale yourself in a symphony of mortified screams with the Scary Shower Curtain, which makes it look like there’s a shadowy figure hiding behind the hanging drape.

The bathroom is traditionally one of the scariest places of the house. For some reason, ghosts have a habit of haunting within tiled walls where people scrub their bodies clean. This curtain should play that up even further, adding an absolutely creepy figure that’s bound to jolt you up better than caffeine when stumbling in the dark to take a leak a 3AM. Aaaah!

Measuring 71 x 72 inches, the Scary Shower Curtain is made from EVA vinyl and comes with 12 plastic hooks, just like any regular bathroom drape you can pick up at the store. It’s only available in white, with the crap-your-pants scary print emblazoned like a silhouette, the same way you’d imagine creepy figures appearing in your favorite horror movies.

The print is only on one side, so you’ll have to decide whether you want to scare folks taking a shower or the ones who just need to use your bathroom for a minute or two if you know what I mean. We suggest permanently turning the lights off in the bathroom and forcing everyone to use candles for better effect.  Playing a scary music soundtrack won’t hurt either.

No one needs horror movies when you can scare yourself silly everyday. Especially while taking a peepee while you’re half-awake in the wee hours of the morning.  The Scary Shower Curtain is available from Urban Outfitters for $28.