Scientists Create Universal Mirror, The Exact Opposite Of An Invisibility Cloak 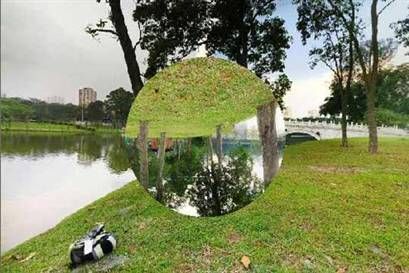 An invisibility cloak reflects light at the exact opposite direction as its source, basically making it look like there’s nothing in the way between you and the object you’re looking straight at. A universal mirror, on the other hand, is its direct contrary, bouncing light back at the exact same location from where it came.

Scientists in Europe and Asia have now been able to produce the latter, a mirror that basically reflects everything back to the same source, regardless of what angle its originating from. Objects it can work on include lights, microwaves and lasers, potentially making them useful for deflection laser weaponry, radar tracking and as a general-purpose shield. Yep, it’s a force field against laser attacks – take that, future soldiers.

The universal mirror (similar to the invisibility cloak originally built in 2006) uses metamaterials, tiny structures that are smaller than light waves, for its construction. Metamaterials are engineered in the lab and are highly difficult to produce, which makes it non-viable yet for larger applications. In fact, the one the team built only measures 1 x 10 centimeters, and can only work with long microwaves, ones that the human eye can’t process. One of the collaborators, Aaron Danner from the National University of Singapore, is said to be working with photonic crystals to produce one that will be visible to the naked eye.

Of course, an in-field application of this device is likely not going to be available within decades. However, it’s a great indication that we really are getting closer to developing the kind of technology science fiction authors only once dreamed about – invisibility domes, force fields, and far out, crazy space-age defense system.