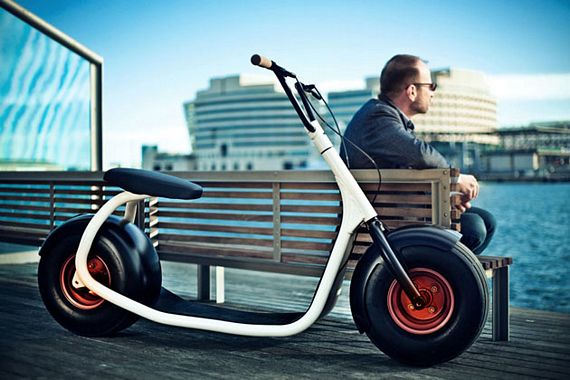 Sure, electric kick scooters like the Zuumer can work fine for urban commuting.  Retaining the classic kick scooter form, though, isn’t exactly the most stylish way to make your way around town.  Somehow, we think the Scrooser can help change that.

While it embraces the classic scooter design, it updates the form considerably in the style department, turning out a personal transporter that looks like a vehicle a grown man can actually ride without feeling like an overgrown child.  Operation remains in the motorized scooter category, though, so you can ride it without a helmet or a license. 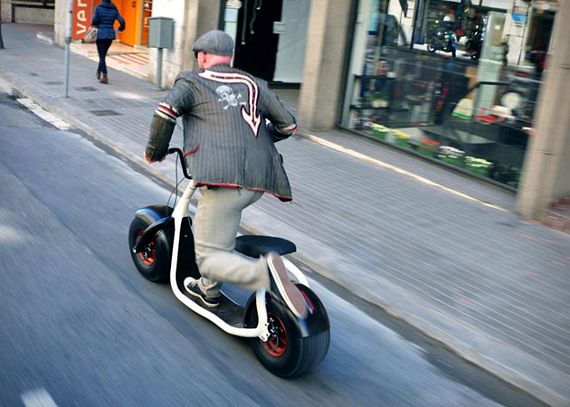 Instead of being ridden strictly standing, the Scrooser comes with a saddle right over the rear wheel, so you can sit your ass down while making your way around the city if you wish.  It retains the wide footboard, too, so you can keep your balance when augmenting the motor with foot kicks, but adds chopper-style handlebars and wide chunky tires.  The wide tires not only gives the vehicle its characteristic look, it also provides a unique riding experience (the product page compares it to “snowboarding through city streets”) and removes the need for a kickstand, although they throw that last one in since you may need it to park on uneven terrain. 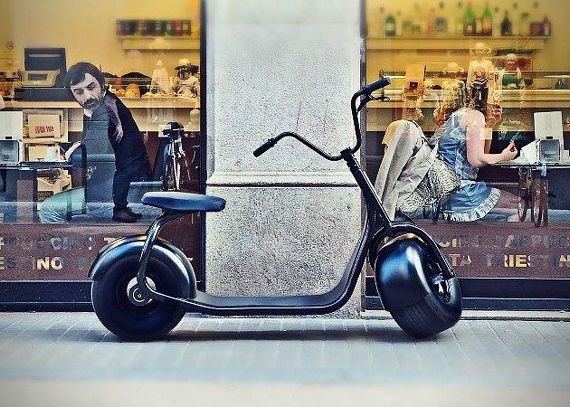 It uses a direct drive motor integrated into the rear wheel rim, so there are no belts, linkages, and other elements that can break.  Powering the motor is a removable lithium-ion battery system stored under the footboard, which you can plug in to a wall outlet either while on the scooter or on its own.  Features include a top speed of 15mph, an Eco mode that limits it to 6 mph (which supposedly extends a single full battery charge to 25 days on moderate use), an onboard LED display showing battery charge, and an ignition lock that keeps the wheels from rolling when the key is removed.

The Scrooser is currently collecting funding on Kickstarter.  Pledges to reserve one of the first 150 units to be produced starts at $3,950.