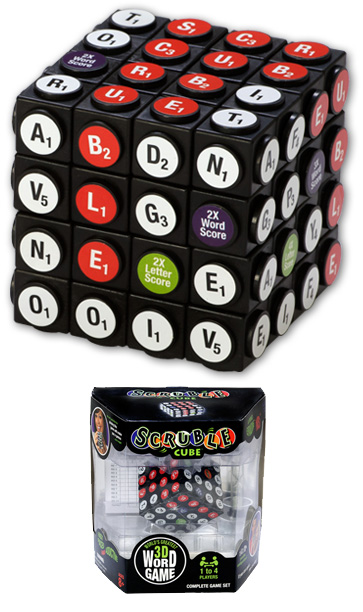 Its creators call it the “World’s Greatest 3D Word Game.”  Given that they probably made up the “3D Word Game” category, I reckon the title’s a lock for the Scruble Cube, a clever mash-up of Scrabble and Rubik’s Cube.

Combining the gameplay mechanics from two tabletop classics, the novel creation lets you form words Scrabble-style over a 4 x4 movable cube.  Instead of colors, each tile on the cube gets a Scrabble-like face, allowing you to spell words with corresponding point totals every time you rotate the blocks.

We’re not entirely sure how the mechanics of the game plays out, but the Scruble Cube does look fun.  With over 7,401 septillion different letter combinations, it makes for a ridiculous amount of words that you can put together.  Even without knowing the rules, I’m sure you can come up with a few games to play on this (e.g. “First one to spell  using only red tiles win.”)

Size is about similar to a regular Rubik’s Cube, so it’s easy to throw in your bag and pull out when killing time.  It ships with a sand timer, a scorepad and an instruction guide, all of which you can throw away while still making the cube playable.

One thing I don’t understand: Why did they put those round tiles on top of the square tiles?  Apart from adding unnecessary bulk, it probably made the thing look just a little uglier.  I guess we better get our hands on it to see what’s the dealio.   The Scruble Cube is available now, priced at $24.95.