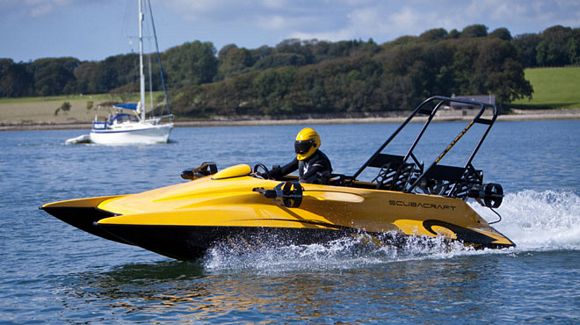 A speed boat that craftily doubles as a submarine has been an endless fascination in many movies and comic books.  If the Scubacraft, which  recently went through underwater testing at the Pinewood Studios, pushes through, that longing can finally become a reality.

On the surface, the Scubacraft looks like a typical luxury racing speedboat, sporting aerodynamic lines and fancy good looks.  Once you tire of the usual sights around the marina, however, it should let you uncover a whole new world right below you – all without having to get off your seat. 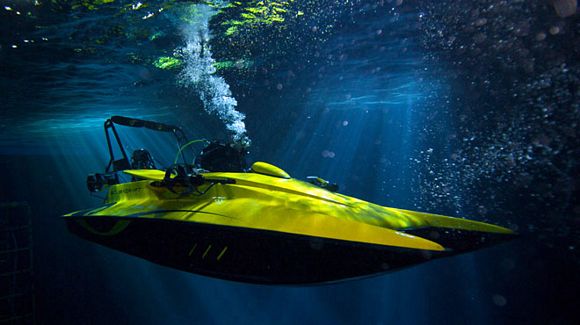 Able to scoot over water at up to 50 miles per hour, then dive up to a depth of 100 feet, it’s the coolest watercraft we’ve seen in the last few years.  Even though it’s not fully-contained like an actual submarine (you’ll have to wear scuba gear when going under), it makes for a uniquely thrilling ride all the same.

The Scubacraft sports a twin-hulled design and runs via a 160 hp engine.  When submerged, it uses electric thrusters that create the illusion of the vehicle “flying” underwater.  Features include a surface VHF radio, a full underwater communications system, onboard GPS and multiple dive capability (yes, it “dives” like a dolphin).

Like many awesome machines still in the prototype stages, there’s no certainty that the diving-capable speedboat will ever really materialize.  Those willing to take the risk, though, can now drop a 5% deposit to reserve a slot.  Prices start at £100,000 (pending customizations), with the first units targeted for delivery around the end of 2010.