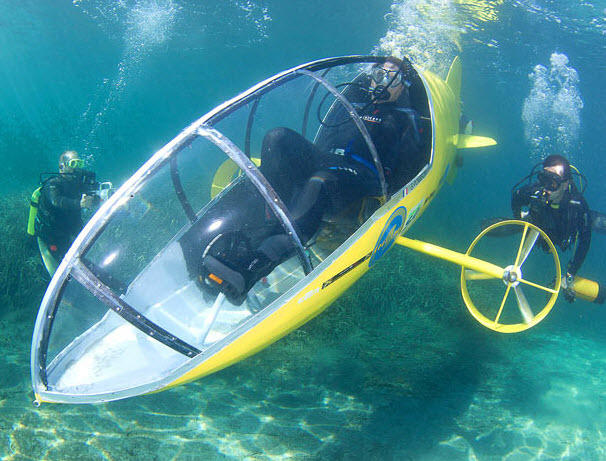 We’ve seen folks take a stab at pedal-powered submersibles before.  The Scubster, however, has a real, working prototype that allows its driver to literally bike underwater.

Created by a team of French engineers, the Stephane Rousson design borrows a resemblance to the yellow submarine used in the classic James Bond flick, The Spy Who Loved Me.  It can probably play perfect for spy work too, with the entirely human-powered mechanism running in stealthy silence.

The Scubster is an almost 14 feet long submersible vehicle, designed to sit a single individual inside the water-tight cabin.  You operate it by working your leg muscles (or arm muscles, if you’re driving it while lying on your stomach), activating the pedal belt that’s connected to a twin-propeller system that pushes the craft forward.  Depending on how well you can ride a bicycle, it can reach top speeds of up to 5 mph, along with a maximum depth of 20 feet.

In its current form, the sub doesn’t have a built-in oxygen system, so you’ll have to go down armed with your own supply.  During recent trials in the Mediterranean waters off the Cote d’Azur, they were able to ride it below the surface for up to one hour without encountering much problems.

While definitely still a work in progress, the Scubster does carry plenty of promise as a recreational submersible.   Rousson says he’s hoping to bring it to market in the near future, with yacht owners who may want a pocket sub they can play with in the sea as the primary prospects.  If plans push through, they might also race it at the 2011 International Submarine Race in the US (where, let’s face it, it will probably place last).