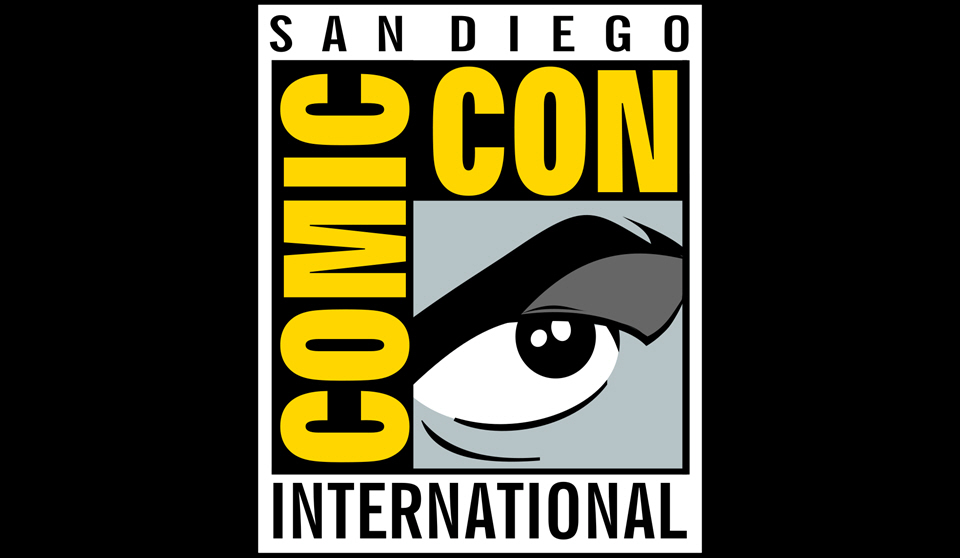 The 2014 San Diego Comic Con has come and gone.  Like previous years, it was used as the stage to launch some of the biggest pop culture projects due for release in the near future.  Here are our favorites. 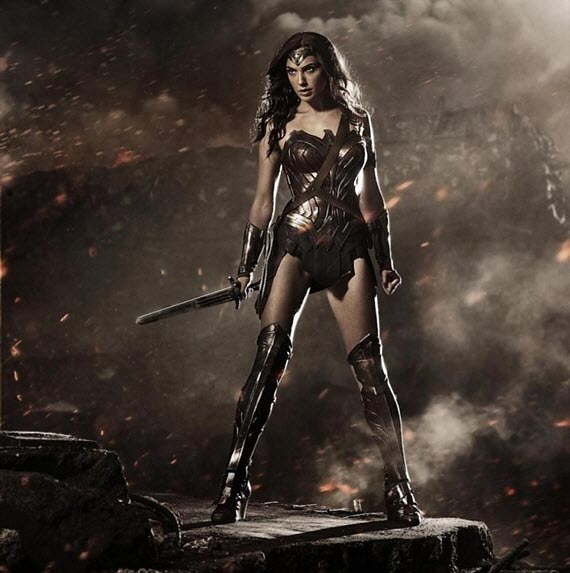 The first official photo of the new Wonder Woman appearing in Batman v Superman: Dawn of Justice were released on Saturday.  And it shamelessly bites on Xena, the Warrior Princess.  And we have no problem with it.  And she looks awesome.  Actress Gal Gadot, best known for her small roles in the Fast and Furious films, dons the Amazon warrior costume.

Pro tip: Color-correct the image to remove the filter if you want to see the costume details much better

Director Zack Snyder unveiled a 50-second teaser of the upcoming Batman v Superman: Dawn of Justice movie.   It starts out with Batman, dressed in full bat armor straight out of Frank Miller’s The Dark Knight Returns, at a Gotham city rooftop, taking the tarp off the all-familiar bat-signal.  Batman, with his eyes glowing white, turns the signal and aims it at a man soaring through the sky.  Of course, it’s the Man of Steel himself, his eyes similarly glowing with heat vision.  Superhero stare down ensues.  Cut to the title screen and teaser over.

It’s short, but definitely enough to get the faithful excited. 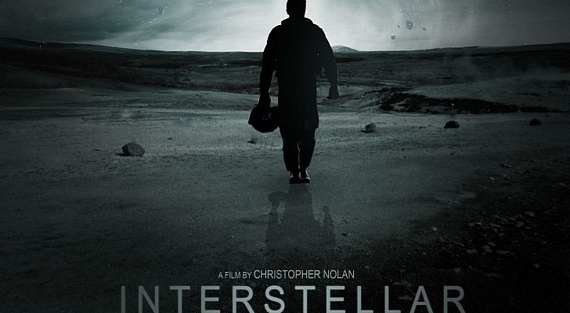 Both director Christopher Nolan and lead star Matthew McConaughey surprised attendees with rare appearances at SDCC 2014.  The pair were on hand to talk about Interstellar, Paramount Pictures’ upcoming sci-fi flick.

At the panel, the duo opened up about some details aboutthe film.  Main takeaways:

A new trailer, which isn’t scheduled for a public release until a few weeks, was shown at the same panel.  Heavy on the space exploration theme, the latest Interstellar teaser reveals more about the plot, which sees humans pushing out into space to find a habitable planet after an ecological disaster threatens to make Earth unlivable for much longer.

Marvel honcho Kevin Feige, along with stars Paul Rudd, Michael Douglas, Evangeline Lilly, and Corey Stoll all sat down to talk about the new Ant-Man film, revealing details about the shrinking superhero.   Rudd will play Ant-Man, Lilly will play Wasp, Stoll will be Yellowjacket, and Douglas will serve as Dr. Hank Phym, the original Ant-Man, who created the size-altering technology that enables the superhero’s abilities.

In the movie, Phym will lose his laboratory to Stoll’s character, who uses the former’s technology to create his own superpower-endowed persona, Yellowjacket.  Scott Lang (the new Ant-Man) will partner with Dr. Phym to steal the size-altering particles from its new owners. Wasp, the alter-ego of Lilly Phym, is the doctor’s estranged daughter.

The video teaser shows the Avengers having a post-battle party in Tony Stark’s penthouse, playing a party game that can only exist in Marvel’s universe: Who can lift Thor’s hammer?  Everybody tries and fails.  While the group laughs at everyone taking turns trying, an electronic wail suddenly rings out, followed by Ultron emerging in their midst.

In the movie, Ultron is an artificial intelligence robot created by Stark Companies to help the Avengers with their work.  Laden with higher intelligence and the ability to learn, it comes to the usual science fiction robot takeover conclusion that human beings are the ones who need to be destroyed.  “There’s only one path to your peace: extinction,” Ultron says in an electronic voice.

Then, a whole load of action scenes ensue.

Footage ends with an eerie image of Tony Stark standing right next to Captain America’s torn shield.  All the Avengers are then shown laid out, seemingly dead, in the rubble around him.

Biggest downer out of the Marvel panel: Still no standalone Hulk movie, despite Ruffalo getting a rousing chant of “Hulk! Hulk! Hulk!” as he stepped onto the stage. 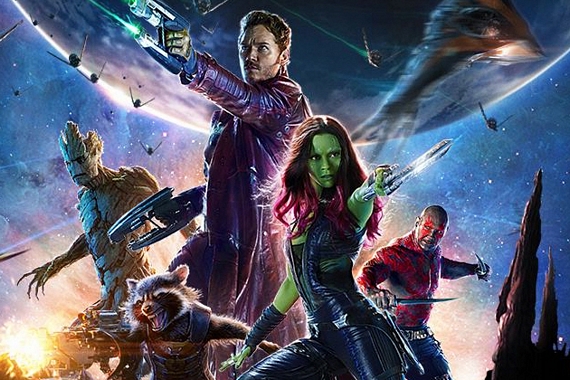 No details for this one, but they confirmed it during the Marvel panel: Guardians of the Galaxy 2 is scheduled to hit theaters July 2017.  It’s a little presumptive to make such an announcement when the first movie is still to hit theaters, but, we’re guessing, Marvel’s early predictions are looking good enough that a sequel is already in the works.

DC will have a stronger TV presence this year with the introduction of three new TV shows to join Arrow, all of which were presented during the Warner Bros/DC panel.   First up was The Flash.

By now, a lot of people will have seen the pilot for The Flash, which leaked online several weeks ago.  The same pilot was screened to attendees at Comic Con, which introduces viewers to the origins of Barry Allen’s superpowers, as well as opening the door to a whole host of superpower-endowed villains (basically, everyone else exposed to S.T.A.R. Labs’ experiment-gone-wrong).

It’s been promised that The Flash will be a very faithful adaptation of the comic book character and the pilot did nothing to change that notion.  Not only did that hold for the origins story, it was apparent in the action (when The Flash runs, he looks like a streaking red blur, like in the comics), the costumes, and other aspects of the pilot.  I’m not a big fan of  the way CW shows are structured (they always get soap opera elements, like they did with Arrow) and that looks it will hold here.  Still, if you can suspend annoyance at the occasional use of soap opera tropes, it looks like a potentially fun show. 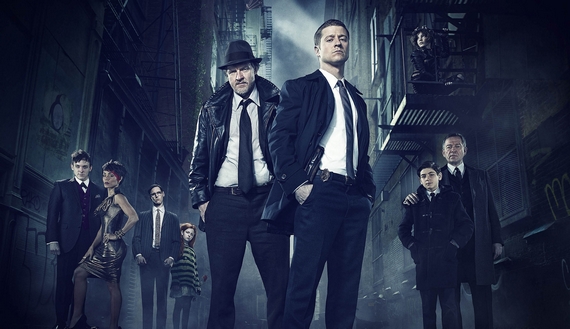 A Gotham city without Batman’s presence may sound strange, but that just means the show will need to come up with something more compelling to keep viewers hooked.  The NBC show will focus around Detective Jim Gordon (played by Ben McKenzie), years before Batman was even a glimmer in young Bruce Wayne’s eye.

There’s a large cast of supporting characters for the show, including a young Bruce Wayne (whose parents will be murdered, as in the original Batman stories), Detective Harvey Bullock (played by Donal Logue), Oswald Cobblepot aka The Penguin (Robin Taylor), and Fish Mooney (Jada Pinkett).  Younger incarnations of The Riddler, Poison Ivy, and Catwoman also make appearances in the pilot.  A pleasant surprise for fans of the 90s-era Batman films, the set borrows liberally from the mood, style, and architecture of Tim Burton’s Batman movies with Michael Keaton.

The last of DC’s three upcoming TV shows, Constantine gets a new trailer during the DC panel.  Played by Matt Ryan, the character is introduced as an exorcist and a dabbler of the dark arts.

In the trailer, Constantine is shown at a psychiatric hospital, where he was confined after damning a little girl’s soul to hell, along with his own.  We’re also introduced to the other main characters, which include Liv Parsons (played by Lucy Griffiths), a psychic who will be integral to the “ancient evil” the main protagonist will face, and Manny the Angel (played by Harold Perrineau).  The show looks like it will be a paranormal-based suspense and horror offering.

The first live-action DC program in the company’s current TV resurgence, details about Arrow’s upcoming season were, naturally, released in the event, along with a brand new trailer.  Plenty of new characters from the DC Universe will appear in the upcoming season, including Katana, The Atom, Count Vertigo, Wildcat, and Ra’s al Ghul.

Considering it’s less than three months since the new reboot of Godzilla came out, Godzilla 2 isn’t likely to be showing up in cinemas until sometime after two or three years.  But fans were excited to get a nibble anyway, with a brief teaser that showed Godzilla with slightly blurred images of classic monsters Mothra, Ghidorah, and Rodan, with the final directive ordering to “Let them fight.”

Legendary, the same guys behind the latest Godzilla movie, made a surprise announcement that the penultimate primate monster, King Kong, is coming back.

The movie will be called Skull Island and will detail the origins of the massive gorilla.  The trailer, originally, looked like it was for the rumored Jurassic Park movie, but ended with the massive gorilla emerging from the jungle, beating his chest mightily while roaring out loud. 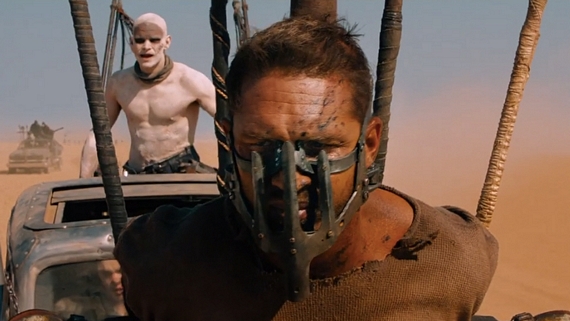 In the making since 2003, it looks like Mad Max: Fury Road is finally coming together.  Even better, the trailer was all sorts of impressive, with a feel that looks very congruent with the trio of movies that came out back in the 70s and 80s.  It’s, easily, one of the highlights of the expo. The new reboot stars Tom Hardy taking the titular role, with Charlize Theron as Imperator Furosa, Nicholas Hoult as Nux, Rosie Huntington-Whiteley as Splendid, Hugh Keays-Byrne as Immortan Joe, and more. 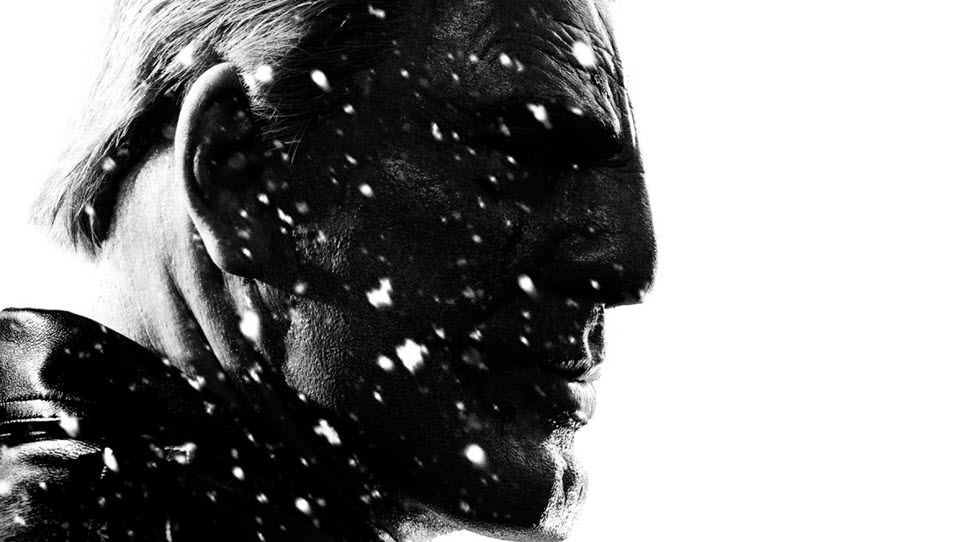 Frank Miller and Robert Rodriguez took the stage at Comic Con this year, showing the opening minutes of Sin City: A Dame to Kill For.  Some of the film’s cast, namely Jessica Alba, Rosario Dawson, and Josh Brolin, then joined the pair onstage, answering questions and discussing the finer details of the film.  Miller additionally revealed that a new Sin City comic book will be coming, with a potential third movie also in the works, although that will be contingent on the second movie’s box office returns. 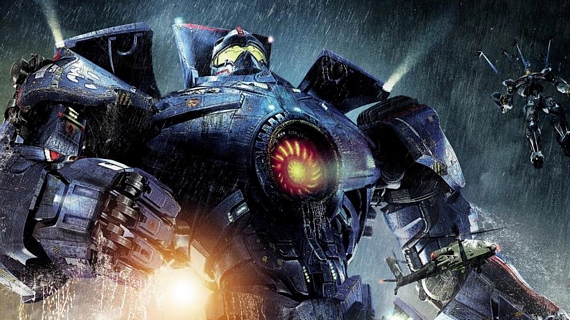 Instead of showing a video teaser for the upcoming sequel, Legendary did something… uhm… legendary to promote Pacific Rim 2, which isn’t slated until 2017.  The studio installed an Oculus Rift in the booth and hooked it up to a machine running Pacific Rim: Jaeger Pilot, a visual reality experience that lets users pilot a Jaeger (the giant mechs from the movie) and fight a monster.  Everyone who tried it lauded the experience as nothing short of amazing.

16. The Hobbit: Battle of the Five Armies 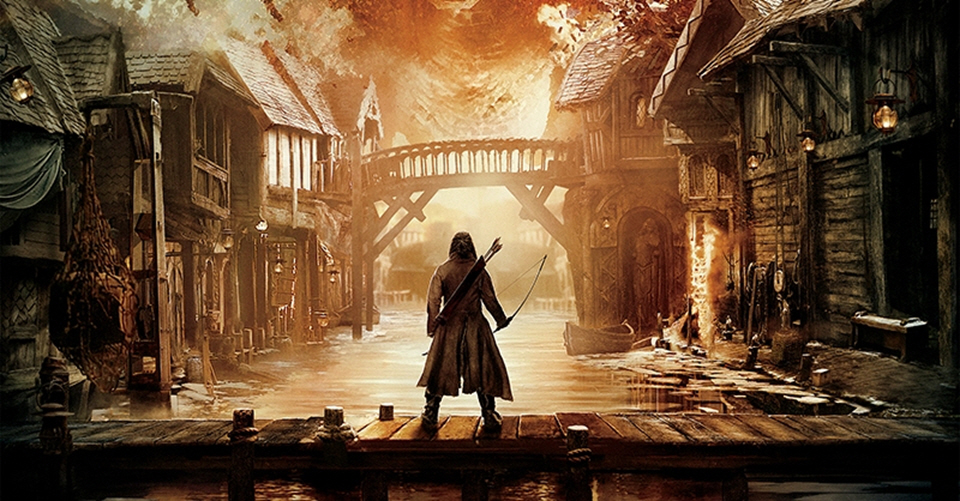 Stephen Colbert, dressed as a lake-town spy, hosted the panel for the final film in the Hobbit and Lord of the Rings series.  Peter Jackson and his cast, which included Cate Blanchett (Galadriel), Orlando Bloom (Legolas), Lee Pace (Thranduil), Benedict Cumberbatch (Smaug), Evangeline Lilly (Tauriel), Luke Evans (Bard), and Graham McTavish (Dwalin), were on hand to answer questions.  The highlight is, of course, the trailer, which featured plenty of battle scenes only fitting for the final installment of the long-running franchise.

The Xbox exclusive got its first video teaser at the expo, presented by executive producer, Ridley Scott.  The story is set between the fourth and fifth Halo video games, which should make for a fun prelude to the upcoming fifth game scheduled for next year.  It will run for five episodes and follow a new character, Jameson Locke, described as “a legendary manhunter” from the Office of Naval Intelligence (ONI).  The series will come as part of the upcoming Halo: The Master Chief Collection.

Warcraft had a conceptual teaser at last year’s SDCC and came back with meatier footage this time around.  The exclusive teaser (not released to the public, sorry) showed the two sides of the Warcraft conflict between the Alliance and the Horde, along with the respective leads for each warring faction.  Timeline for the movie will be set before Blizzard’s massively-successful Warcraft franchise takes place, serving as an origins story that show how Azeroth fell into conflict between orcs and humans. 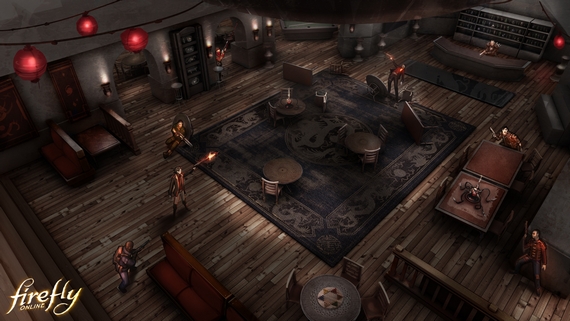 Comic Con is a huge show and a 20-strong list doesn’t quite do it justice.  Other highlights include the Season 5 panel for The Walking Dead (which showed a full trailer for the upcoming season), the Season 5 panel for Game of Thrones (which introduced the upcoming season’s cast, any of whom can face an untimely death), the new Disney XD show Star Wars Rebels, Lego Batman 3: Beyond Gotham, the upcoming Fight Club comic book sequel, and Kevin Smith’s weird horror movie, Tusk.