Seabreacher X, A Submersible Designed To Look Like A Shark 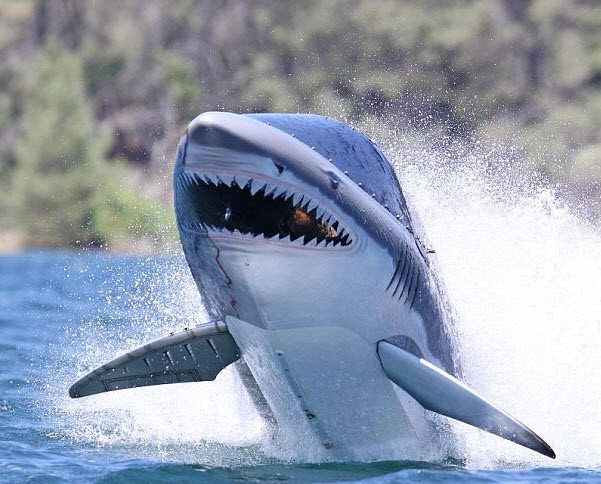 Next time you think you see a shark jumping out of the water, take a closer look.  Why?  It just might be the Seabreacher X, a high-speed submersible that’s been intentionally made to look like a great white shark, complete with dorsal fins, gill arches and rows of meat-tearing sharp teeth.

Created by Innespace, the recreational vehicle follows in the tradition of the pair’s previous projects, which include a submarine that looks like a dolphin.  This time, though, they shed the nice-guy dolphin attitude in favor of an  ultra-aggressive Shark-style body.  And at 16.5 feet long, it’s about as big as one too. 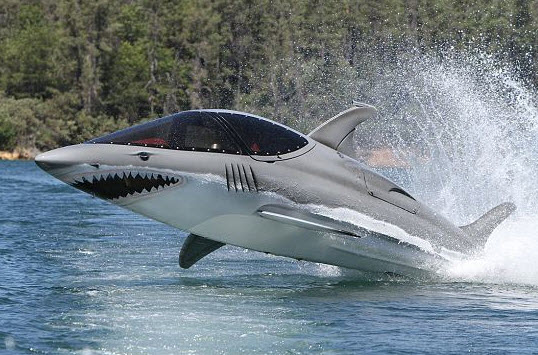 The Seabreacher X is a high-speed watercraft, powered by a 260hp supercharged engine.  It can travel at a pace of 50 mph on the surface, sustain dives at 25 mph, roll to the sides at a 90-degree angle (yep, it rolls like a fish) and jump out of the water at a ridiculous 12 feet of elevation.  More than the paint job that makes it look like a carnivorous marine animal, it features a fully-vectored thrust system that mimics the tail articulation of an actual shark, along with a custom exhaust that’s been tuned to release a “throaty growl.”  Yes, all it needs is external speakers playing the Jaws soundtrack on loop and you can clear out an entire beach in seconds.

Cabin features a two-seater configuration, with the pilot in front and a passenger in the back.  Aside from driving controls, it’s got LCD screens (displays live feed from a snorkel-mounted camera), GPS navigation, an onboard sound system, a closed cooling system and a bevy of safety equipment.

Only ten examples of the Seabreacher X will be made, each one priced upwards of $100,000 (you’ll have to reserve to get an exact quote).  Innespace’s team of seven people currently build one every three months, so you’ll have to wait in line to get one too, even if you had the money to spare.